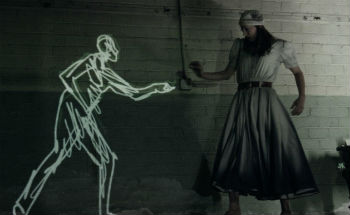 New Video for While My Guitar Gently Weeps

In 2006, Cirque de Soliel and The Beatles combined forces and launched a breathtaking show that blended the classic music of the band with the physical perfection of the circus troupe. To commemorate the tenth anniversary of the popular Las Vegas show, The Beatles released a video for While My Guitar Gently Weeps taken from a reimagined segment of the show.

Like much of the music featured in this show, this isn’t the While My Guitar Gently Weeps that you’re used to hearing on the White Album. The basic track, which was released on Anthology 3 in 1996, is simply composer George Harrison singing along to his own guitar accompaniment and a light organ part recorded by Paul McCartney. Simple, quiet, and stunningly beautiful, this demo version of the now iconic piece stands in stark contrast to the final released version.

As a part of the anniversary celebration, the folks at Cirque decided to change the staging of the While My Guitar Gently Weeps segment of the show. Now blending a live dancer (Eira Glover) with a projected animated dance partner, the video for this segment stays true to the stage performance and is produced only with light projections and stays away from computer assisted graphics.

This video truly exemplifies the mastery Cirque de Soliel has achieved at blending traditional performance/circus arts with modern technology and stage craft and the inclusion of rock and roll’s most iconic and beloved catalog only adds to the power of this show.

Love plays at the Mirage theater in Las Vegas and the soundtrack, which blends dozens of Beatles songs into one lengthy suite, is a treat for die hard Beatles fans and casual fans alike.