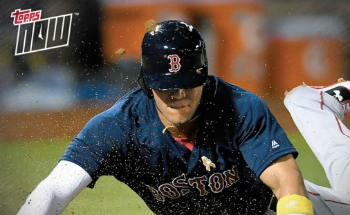 The Battle of the Yoan Moncada Cards

The 2016 baseball season has seen a growing interest for real-time trading card releases. Topps has reacted to the demand with their Topps Now series, with a checklist well over 400 cards, and Leaf has jumped into the game with their Leaf Live series.

Fundamentally, the two card companies are taking a much different approach to their products. Leaf, thus far, is releasing one card whenever it deems it fit to do so while Topps is releasing several a day but this week both companies commemorated the call up of Boston’s Yoan Moncada with Now and Live releases. The difference, though, is that Topps features an image from the game and Leaf features a generic, logo free, image due to exclusivity rights which begs the question, will collectors care about the Leaf Live Yoan Moncada release?

Yoan Moncada, 21, was a highly anticipated call up for the Boston Red Sox this year when rosters expanded in September. Boston, in 2015, paid a $31.5 million signing bonus to the Cuban infielder who then began the 2016 season listed as the 5th best prospect in baseball.

Since 2012, between Cuban league play, minor league play, and three major league games, Moncada has a .287/.395/.480 batting line with 23 home runs through 854 plate appearances (2.6%) and his debut at bat was a walk which would eventually convert to a run. Because Yoan Moncada is such a highly valued prospect for the Red Sox, it is no wonder why his call up was big news but will the excitement extend to these “on demand” trading cards?

As of this writing, the Topps Now card sold 2,333 copies in its 24-hour sale window making it the 16th best selling card of the series thus far. Leaf Live cards are available for seven days so final sales numbers aren’t available yet but it is hard to imagine that the sales figures will be even remotely close together. Should Leaf even bother with baseball cards in this series?

The first Leaf Live card was in honor of Gene Wilder and was met with its own share of criticism but made sense in terms of the style of the Leaf brand. Baseball cards, in particular these types of real-time event cards, suffer from the lack of team-specific branding, and collectors may not flock to any of these without the prize of an autograph or relic being associated with it.

As a collector, what are your thoughts on Leaf Live incorporating baseball highlights into their series? Will you purchase them? Will the probable scarcity entice you to put down your dollars towards these cards or will you continue to focus on the Topps Now product which will, undoubtedly, mirror every Leaf Live baseball card yet to come?

Leave your thoughts in the comments section or join one of the Hero Habit groups to continue the conversation.

Tony Frye is the founder and editor of Hero Habit. He hosts the Kinks and Beatles Deep Dive podcast (when his two year old lets him) and is a fan of the Oakland A's, Batman, burritos, and funny things.