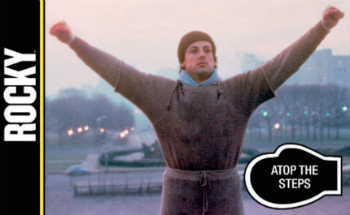 It is rare that a trading card company releases a set of non-sports trading cards that is larger than 72 or 81 but to honor the 40th anniversary of Rocky, Topps is pulling out the big guns.

Available exclusively online, the 2016 Topps Rocky set is 330 cards that cover every movie in the franchise’s 40 year history. The cards are sold as a complete set for only $59.99 so it isn’t a traditional hobby box release but randomly inserted Sylvester Stallone autographs still make this worthwhile for collectors.

The card design for 2016 Topps Rocky is a throwback to the 1979 Topps Rocky II design with production stills centered on a yellow border and card titles presented on a boxing glove. Topps also released a set for Rocky IV in 1985 with a similar but different design. A 10 card promo set, available at the 2016 National Card Show and via Topps online, was released a month prior to this set.

Since the first film was released in 1976, the Rocky franchise has grossed over $1 Billion worldwide and remains a cultural cornerstone with endless references throughout pop culture to Rocky’s catchphrases, music, and staging.

The original Rocky film won three academy awards including best picture and the American Film Institute named it the second-best sports film of all time (right behind Raging Bull). For his portrayal of a professional boxer, Sylvester Stallone was inducted into the International Boxing Hall of Fame in 2010.

2016 Topps Rocky cards are the perfect addition to a sports or film trading card collection and will surely be popular among collectors considering the importance of the source material. A full checklist for this set can be found using the tab at the top of the screen and reviews for this product can be left using the button to the right.