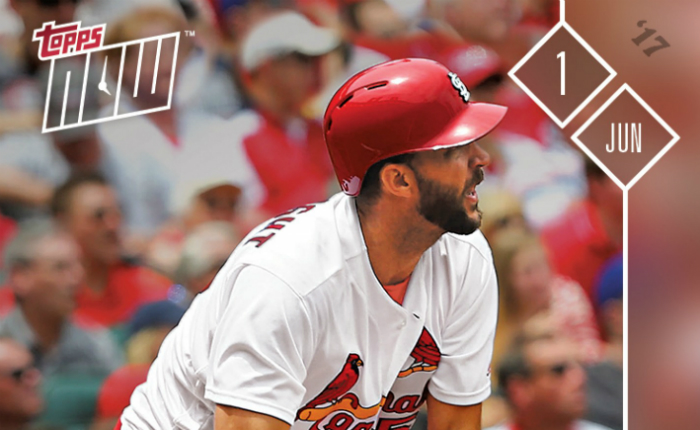 On Thursday, June 1, 2017, Adam Wainwright of the St. Louis Cardinals managed to do something that had never been done in Cardinals history – score all the runs and pitch a shut out.

Facing off against the Los Angeles Dodgers, Wainwright threw six innings of shut-out baseball, allowing only four hits and two walks while striking out six. His shut-out innings were followed by three more shut-out innings courtesy of the Cardinals’ bullpen but the historic moment came in the bottom of the second when Wainwright hit a two out, two run homer to left field.

Why is that historic? Because those were the only two runs the Cardinals would score during that game and it is the first time that the Cardinals have shut-out an opponent with all of their runs coming off the bat of the pitcher.

This was Wainwright’s second homer of the season and his sixth and seventh RBI over 24 plate appearances. This acheivement is commemorated on Topps Now card #204 and is the second card to feature Adam Wainwright so far this season. The first, card #58, sold 275 copies.

Meanwhile, in Toronto, Aaron Hicks was proving that their is another Aaron worthy of attention in the Yankees lineup as he became the first Yankee to bring in six runs without hitting a home run since Joe Girardi achieved the feat in 1999.

He began driving people home early when, in the top of the first with bases loaded, he hit a double to right field that brought in Aaron Judge, Matt Holiday, and Starlin Castro (3 RBI). In the top of the seventh inning, Hicks hit another double to right which scored Didi Gregorius from first, where he reached on an error in the previous at bat (4 RBI).

In the top of the ninth, already leading 9-2, Hicks hit a double to left which allowed Holliday and Gregorius to score (6 RBI) from second and first base respectively. All told, Hicks went 4 for 5 with 6 RBI and 2 runs with three of his hits for extra bases. Topps Now card #205 commemorates this achievement and is the first card to feature Aaron Hicks this season.

And finally we come to the Minnesota Twins and card #206 which features Miguel Sano, Brian Dozier, and Joe Mauer who, together, turned the first 5-4-3 triple play for the Twins since 2006.

In a 4-2 victory over the Los Angeles Angeles of Anaheim of Los Angeles of Angels, in Los Angeles, the big triple play came in the bottom of the fourth inning with Albert Pujols on second, Yunel Escobar on first, and Jefry Mart at the plate. With no outs and a 1-0 count, Marte took a swing that went right to third base and easily allowed the Twins to go around the horn and record the inning ending feat.

There have been 711 triple plays in baseball history, an average of five per season or once ever 486 games, ranking this among baseball’s less common occurrences. Topps Now card #206 is the first for Sano and Dozier, and the second for Mauer who appeared on card #113 which sold 290 copies.

As always, please use one of our links to take you to the official Topps Now page while these cards are still available.