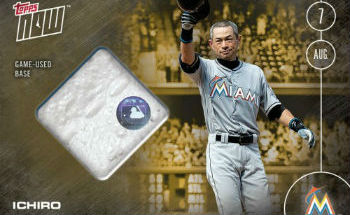 In his 16 seasons of American baseball, Ichiro has never missed more than 19 games in a season and has, in total, walked up to the plate a total of 10,333 times. For those of you interested in such things, that puts his batting average at .314 and before you fill the comments with “batting average is meaningless” diatribes, sit back and take in how impressive that number really is. He reached base in 81% of the games he appeared in and 17% of those times, he stole a base. So, yeah, batting average is a flawed statistic but in the case of Ichiro, it actually does paint a pretty solid picture of the type of threat he is in the batter’s box.

A milestone such as this, which does not happen too often and won’t happen again until Adrian Beltre tags first 122 more times, does not go unnoticed by companies like Topps who specialize in immortalizing the game we all love. With their Topps Now series, a daily print-on-demand card offering, the first baseball cards dedicated to this monster achievement have hit the market just hours after the ball hit his bat.

As a part of their base set (card #327), Ichiro is seen tipping his cap to his fans. This card, like all Topps Now cards, is limited only to the number of people who buy it in the next 24 hours. Where Topps is upping the ante, though, is in their set of relics which go above and beyond the relic cards first introduced for the Home Run Derby winner last month. This time around, Topps is offering five variants to the relic card with very specific print runs.

You’ll probably notice that all the cards are sold out already. That happened in the time it took to write this article so your only option now is to wait around for one to appear in your mailbox or head over to the secondary market where the cards are already appearing (there are some on eBay linked below). Even with the yellow card coming in at a price point around a dollar for every three hits, these cards are sure to appreciate in the immediate future so if you find a deal for one of these prices, take it! If you can’t drop the dough, revel in the fact that you got to watch such a historical moment happen in a sport littered with historical moments.

Ichiro is currently ranked at 29 (tied with Roberto Clemente) in terms of all time hits (if you don’t count his seasons playing in Japan) and could finish in the mid 20’s by season’s end.