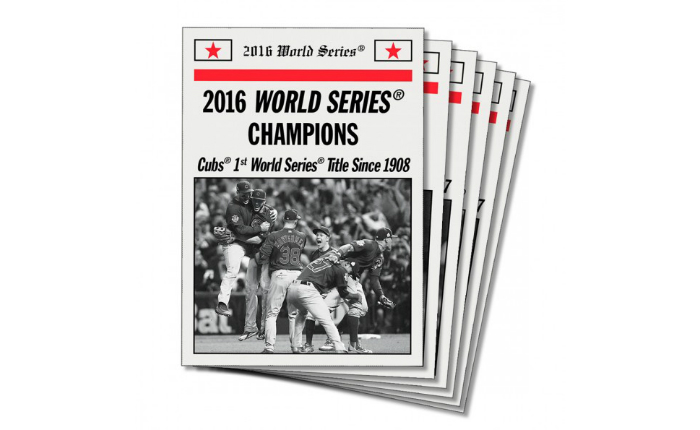 Topps is honoring the Chicago Cubs’ historic World Series victory with a series of cards designed as a ’69 throwback. The latest addition to their Throwback Thursday series, six new cards are added to the checklist which features the design of the World Series cards found in the 1969 Topps Baseball set.

The original cards, which commemorated the 1968 World Series between the St. Louis Cardinals and the Detroit Tigers, were a small subset within the 1969 checklist spanning #162-169. While the 1969 Topps set contained several future Hall of Fame inductees, the ’69 throwback features players destined to make a mark in Cooperstown, if for not other reason than that they played on the 2016 Chicago Cubs.

The checklist for the ’69 throwback, which is only available online via Topps for seven days, is as follows:

The original design was based on the covers of The Sporting News with a large headline, half height picture, game score, and a short photo caption. The ’69 throwback version does not include the smaller details and is more of an homage to 1969 Topps than a true throwback to that design.

Topps is enjoying great sales numbers for their on-demand Chicago Cubs cards over the last month. Many of the Topps Now products have sold in the thousands and a team set sold over 6000 packs. Autograph and relic cards consistently sold out within hours of release and the secondary trade market has had many of these cards appear and sell for more than original value. Although Topps is likely to continue commemorating the 2016 World Series, especially after inking an exclusive autograph deal with Kris Bryant last week, it is hard to imagine where those tributes will fit in future on-demand products following the release of this set.