On October 1, 2020, the Oakland A’s postseason story finally entered a new chapter — the next one.

Oakland has appeared in the postseason 11 times over the past 20 years but not since the 2006 season have they been able to progress beyond the first round. During the 2020 season, a strange season by any measure, they began their playoff run with a three game Wild Card series against the Chicago White Sox and had to fight all the way to the final out of game three to secure their spot in the ALDS.

To commemorate the accomplishment, Topps has released several trading cards from game three as a part of their Topps Now program. The cards are available for purchase for 24 hours and print runs are limited to the total ordered. 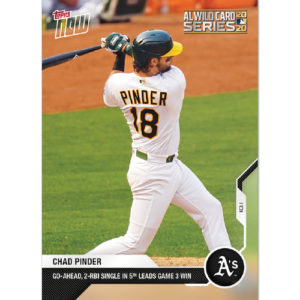 Two of the cards dedicated to game three actually commemorate the losing team. Card #349 is a Luis Robert rookie card that highlights a monstrous home run he hit in the second inning. Not only was it the young star’s first postseason homer but it also set a record for the furthest home run in the Oakland Coliseum since Statcast has been tracking such stats — 487 feet and 112.2 miles per hour out of the box.

A series of extra-limited, numbered autograph cards were also made available for the Robert card and quickly sold out.

Tim Anderson is the subject of card #350, also for setting a record. Over the course of his three first postseason games, the shortstop logged a .643 batting average with nine hits. It is the most hits a player has ever had in their first three postseason games. Anderson went 9 for 14 with two doubles. None of those hits equated to any RBI but he was a constant threat against Oakland’s pitching staff.

Card #351 features Chad Pinder as he drove in two runs on a single in the fifth inning to give the A’s a lead they wouldn’t relinquish for the rest of the game. These were the only RBI credited to Pinder who had three hits and a walk over the entire series. 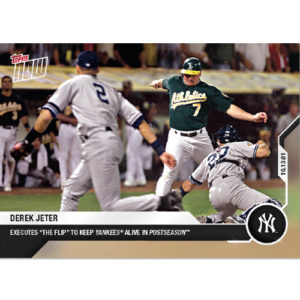 The final card from this game is #352 which showcases a post-win team exchanging high-fives on the field. Mark Canha, who may have saved the series with an incredible catch during game two, is seen high-fiving game three clutch hitter Pinder.

The next round will pit the Athletics against the Houston Astros in the ALCS. Oakland had a .700 win record against Houston in the regular season and outscored them by 13 runs over 10 games.

In a move that may take the joy away from A’s fans, at least temporarily, Topps also released a card to commemorate “The Flip” an infamous play by Derek Jeter that kept the Yankees in the postseason and sparked a comeback that included three elimination games to oust Oakland from the playoffs in 2001.

All of the game three cards are available from Topps until October 3, 2020.