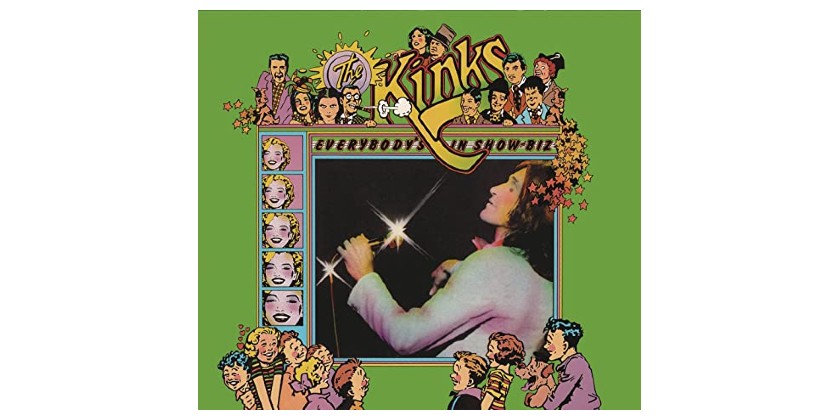 No accolade or superlative is too grandiose when it comes to praising Waterloo Sunset. The song is as close to perfect as any rock composer is likely to get and the performance by The Kinks is nothing short of superb. In fact, the song is often regarded as one of the great works of British pop music and though it didn’t gain the contemporary popularity in the United States that it enjoyed in England, the song has become a favorite of Kinks fans on both sides of the pond.

But it was far from the only masterpiece to rise to the surface of the band’s 30 year recording career. Ray, Dave, and the boys were prolific when it came to churning out classic ballads, heart pumping rockers, and expertly crafted pop tunes — one such master ballad being Sitting In My Hotel from their 1972 album Everybody’s In Show-Biz.

On the surface, the song is a lovely piano driven ballad about the lonely life of the immensely popular. The arrangement effortlessly ebbs and flows between soft, contemplative introspection and power-ballad, anguish-filled despair with Hammond organ crescendos that rival any symphony Beethoven committed to paper.

A little below the surface, however, is a common thread. Not just a conceptual commonality like the many that can often be found in Ray Davies’ song writing, but an actual thread to an earlier work. Whether consciously or not, Ray Davies penned a sequel to his own masterpiece, Waterloo Sunset.

In Waterloo Sunset, Davies alternates between a first person narrative and a third person narrative. Assuming the narrator is actually him, he alternates between explaining what he is viewing from afar — a love story between Terry and Julie — and what he’s personally feeling inside. The Terry and Julie love story seamlessly shifts to lines like “but I don’t need no friends” and “as long as I gaze on Waterloo sunset.” It is in these introspective lines that a connection can be drawn to Sitting In My Hotel.

In Hotel, Ray sings about “if my friends could see me now” which implies a distance — possibly time, possibly miles, possibly emotional — which connects directly to Waterloo’s “but I don’t need no friends”. Then there is the line “seven stories high, looking at the world gone by” which connects directly to “Every day I look at the world from my window” from Waterloo Sunset. The character in Sitting In My Hotel is the same as the character in Waterloo Sunset,

The two songs are separated by five years and taken at face value they paint a heart breaking portrait. Where Ray once sang about not needing friends as long as he has a lovely sunset to gaze upon, he now sings about how those friends wouldn’t recognize him as the man he has become. The character — or Ray, if you believe that both songs are autobiographical — has become more alienated from the world, more locked in, more reclusive but his ability to find joy in simple things has fallen away and now he longs for a more human experience.

Stylistically, the songs don’t sound particularly related but conceptually, lyrically, they are a two part tale of a sad, scared, and hurt man “hiding from the dramas of this great big world” because “people so busy, makes me feel dizzy.” He’s a man afraid of the world outside his window and yet drawn to its sunsets and sunny days in June. A man who scoffs at the idea of needing friends but finds himself thinking about them late at night from his seventh story hotel room and judging his own success and evolution against what he believes their perception would be.

In many ways, these two songs taken together make up a story more powerful, emotional, relatable, and raw than any of the concept albums the band produced in the 1970s. This is the true mark of genius that, five years later, a songwriter may stumble upon continuing a tale that everyone thought was already finished. Whether it was a conscious decision, the result of art imitating life, or just a coincidence these two masterpieces will forever be regarded, by me, as a singular suite of beautiful sadness and both songs are lifted because of the other.

Be sure to subscribe to the Kinks and Beats Daily (ish) podcast.