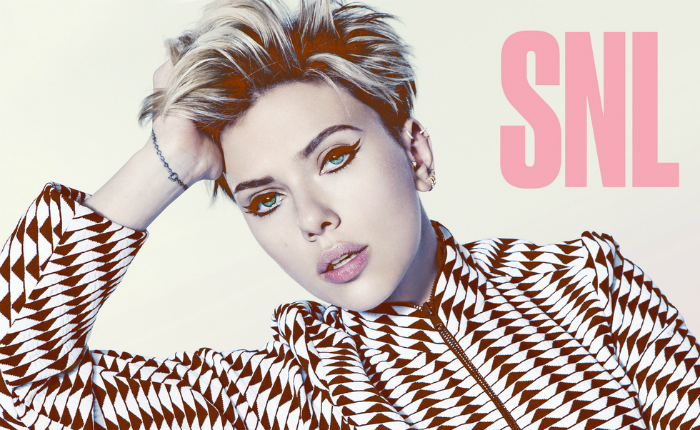 It is no surprise that this season of Saturday Night Live has raked in the highest ratings since 1994, when Adam Sandler and Chris Farley were performing their prime sketches on live television. With each episode consisting on non-stop poking at the current oval office leader with Alec Baldwin’s stellar impressions, dropping accidental F-bombs with Kristen Stewart and dragging Jeff Sessions through the mud by his ears with Kate Mckinnon, this years ratings have crushed last years by 60 percent in total viewers according to TVLine.

The show’s resurrection, with the help of multiple social media platforms and their unchanging “Currently Trending” sections, has taken television by storm and has caused thousands to tune in to the late night variety sketch show.

This week’s host, Scarlett Johansson, has been no exception to this. Her return to NBC’s Studio 8H, having solidified her 5th time hosting, earned her a spot in the “Five Time Club” which was celebrated with a song that, for some reason, made me terribly hungry. There was no doubt this episode would be regarded with high expectation.

Overall, the episode seemed to have been a hit and miss in its sketches. A very typical cold open with Alec Baldwin as Donald Trump in an “aliens invade earth what do we do now” scenario that staked its beat by showing Trump flubbing The Pledge of Allegiance, a joke that seemed to ultimately earn laughter from the audience. The punchline? Simple: Your president is an unprepared idiot, and we would definitely all die in an alien invasion.

The monologue and the one-bit sketch that followed were forgettable. However one thing that personally pleased me was the consistent use of Saturday Night Live’s long running cast member Kenan Thompson. The lack of his presence this season has echoed through each episode, and it was nice seeing him pop-up in several sketches through the show.

The sketch of Cherry Grove, an alternative take on the gay reality show Fire Island portrayed a group of middle-aged lesbians bearing water-birthed babies and stereotypical arguments that lesbian couples often find themselves in. A solid sketch carried by SNL’s resident lesbian, Kate McKinnon. The gag rests upon the shoulders of the differences gay men and women have but overall remains passable in the fact that most of it is true.

Mixed in throughout the Trump jokes and the lesbian jokes that the show held high was the ever evolving Weekend Update with Colin Jost and Michael Che. Their jokes fell flat, but their overall vibe was relaxed and confident. Guests included Al Franken and Jeff Sessions bantering about how big of an idiot Jeff Sessions truly is, and “First Impressions” Pete Davidson.

Davidson, who recently took to his Instagram to share his drug recovery process with his followers looked better than ever sitting on-air talking about “waking up with boners again”.

The Olive Garden sketch admittedly made me laugh. It’s weirdness and out of place jokes made it seem more like a poke at the restaurant rather than a sponsored product placement, but I guess we’ll never truly know.

We had the pleasure of seeing Shud the Blobfish once again played by Kate McKinnon, who brought a new friend to the table: an Angler fish taken on by the host, Scarlett Johansson. The sketch that mostly played with horrifying sexual jokes and two renditions of The Simpsons theme song, still came off as ridiculously strong, as McKinnon’s fearlessness was put in the limelight once again. Seriously, is there anything she can’t do?

Leslie Jones, having torn her ACL in her last attempt at playing Shanice, a really awful and awkward ninja, shows that she’s truly not afraid to return to the role. The sketch fell flat even with the help of Johansson playing a competent ninja, but it was nice to see the character again.

With International Women’s Day just passing, the show played on men writing a sketch “for the women” that turned out just to be Kyle Mooney and Beck Bennett mansplaining through an entire skit while the women all sat at a table. The show even used its musical guest Lorde for a split two seconds before the men sang over her, deeming her just as useless as the other women in the skit.

And naturally, as we now know we can’t have Saturday Night Live without a plethora of Trump jokes, we see Ivanka targeted in a pre-recorded sketch played by Johansson, calling her exactly what she seems to be to her father: Complicit.

The ten to one sketch ultimately seemed better as it went on with Vanessa Bayer discovering her humble dentist husband wrote “lit” club songs in his free time. The sketch was weird, and it worked in comparison to 90% of this seasons lacking 10to1’s.

This season’s 16th episode was overall fairly underwhelming. As someone who expected a slightly more momentous “Welcome to our 5 time club” event, Scarlett’s performance, while well acted and strong, did not meet my personal expectation of what the show could have succeeded in doing. But, can we just mention the Trump supporting dog who successfully portrayed every racist white man you’ve ever met? Spot on.