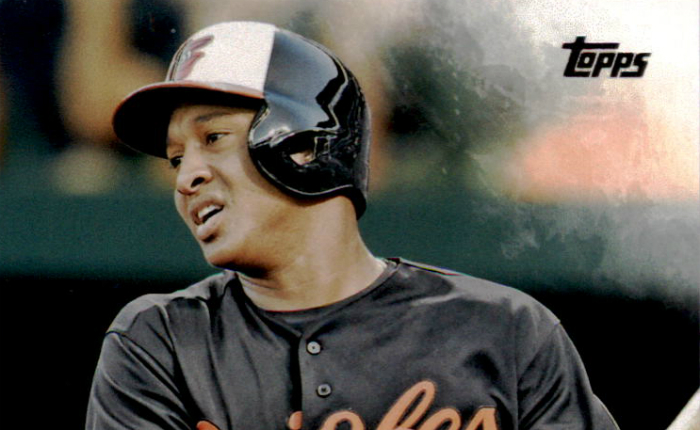 Jonathan Schoop never walks. Well, rarely. In the baseball sense of the word that is, just so we’re clear.

The Curaçaoan is the owner of 44 career walks in 1464 plate appearances across four major league seasons. That’s a slightly lower number of walks than, say, Barry Bonds had in June of 2004. His walk rate sits at 3%; only six position players have more plate appearances and a lower walk rate in the liveball era.

Such aversion to ball four requires dedication, and Baltimore’s second baseman doesn’t make it easy for a pitcher to walk him, even accidentally. Incredibly, Schoop went all of 2015, encompassing 321 plate appearances, without seeing a single 3-0 count. That is by far the most recorded plate appearances in a season without once reaching 3-0.*

*Pitch count data goes back to 1988 but is not complete for some years. The second most PA in a season without seeing a 3-0 count is either 204 (by Padres utility man Archi Cianfrocco) or 136 (by Kevin Mitchell in 1998) . In either case, Schoop’s 321 PA eclipses all other such seasons.

How did he do it? Well, swinging at a whole lot of 2-0 counts helped. Schoop saw 28 pitches in a 2-0 count that season and swung at 25 of them. The other three were called for strikes.

In fact, the rate at which Schoop swings at 2-0 is unprecedented in the pitch count era. Since 1988, 1400-odd players have seen at least 100 pitches in a 2-0 count. No one has swung more often as these pitches than Schoop, his 69.9% swing rate at these pitches being unmatched

This penchant for swinging at 2-0 means Schoop fits right in with the approach of his current ballclub. Only the Royals and Phillies swung at a higher percentage of 2-0 pitches than Schoop’s Orioles last season, while no team swung at a greater percentage of 3-0 pitches either. Schoop doesn’t reach 3-0 counts often enough to have worthwhile data in those plate appearances but, for what it’s worth, he swung at two of the eight 3-0 counts he saw last season (25%). The league average swing rate at these pitches is 8.8%.

It should come as no surprise that Schoop’s on-base percentage (OBP) after 2-0 and 3-0 is among the lowest in the league. His career .398 OBP after reaching 2-0 is the second lowest among actives with 125 such PA. (Wilmer Flores‘ league-lagging .344 OBP probably deserves a post of its own.) And only four active players have seen both more 3-0 counts than Schoop and posted a lower OBP in those PA .

All this swinging means that Schoop’s plate appearances end sooner than most. His 3.45 pitches per plate appearance was the fourth lowest figure among qualified hitters last season. Four pitch walks are, naturally, exceedingly rare for Schoop. He has as many of those as Ben Revere has home runs: six.

Schoop certainly hits dingers more frequently than Revere does, slugging 40 in the past two seasons. This low OBP / moderately high slugging mix is unusual for a second baseman: Schoop and the Cardinals’ Jedd Gyorko are the only second basemen in history with a sub-.300 OBP and a slugging percentage over .400 (minimum 1000 plate appearances).

Of course, Schoop doesn’t make his living by walking. He slugs for enough power to make him a more-or-less average hitter overall. When you mix in his passable up the-middle defense you have something like a league average player. So enjoy Jonathan Schoop’s swinging ways. Homers are more entertaining than walks anyhow.