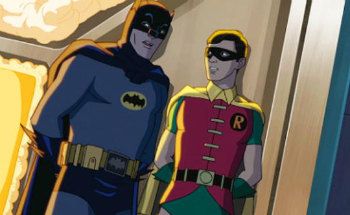 In recent years there has been a nostalgic resurgence in the popularity of the Batman television show from the 1960s and today Entertainment Weekly announced that a new animated feature, Batman: Return of the Caped Crusaders, is set for a fall release.

Reuniting Batman 66’s Adam West (Batman) with Burt Ward (Robin) and Julie Newmar (Catwoman), Batman: Return of the Caped Crusaders is stylistically similar to the classic live action program and if the trailer is any indication, the script will have all of the camp that fans have come to love from the original.

For many fans, the television show, which ran from 1966 to 1968, was their first live action Batman so it stands to reason that the light, campy, and sometimes silly style of that show remains popular amid a landscape of dark, gritty, hyper-realistic portrayals.

Batman ’66 has been the modern subject of a comic book line, action figures, Funko figurines, statues and, of course, is the inspiration for some of the most iconic Batman trading cards of all time so an animated feature is a reasonable evolution for this constantly growing brand. Speaking of the trading cards, Cryptozoic has been releasing chromium reproductions of the Batman ’66 cards as inserts in their various DC Comics offerings so that version of the Bat is still very much at the forefront of the pop culture marketplace.

Batman: Return of the Caped Crusaders will be released on November 1 and, like many DC animated features, is a direct to video release. Very little is gleaned from the teaser released exclusively to Entertainment Weekly other than the possibility that part of the story takes place in space and that the usual rogues gallery will be present.

As the release date nears, Hero Habit will post a hub for your reviews and commentary to what will probably be a popular DVD release.