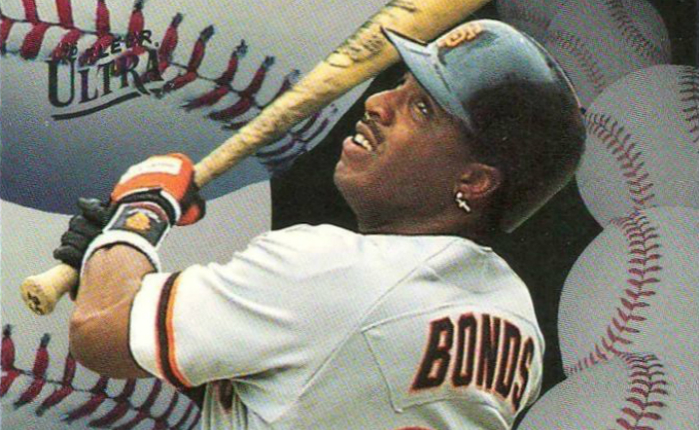 About a year ago I wondered what the best possible version of a Barry Bonds season would have looked like. Bonds, as may have been discussed before, had both one of the greatest careers that major league baseball has ever seen, and one of the more unusual career progressions. An elite defensive outfielder and baserunner in his youth, Bonds turned from the greatest hitter of his time into arguably the greatest hitter of all time.

Bonds’ record-breaking offensive years coming towards the end of his career meant that there was no overlap between his best seasons with the bat and his best years in the field or on the bases. A hypothetical mega-season, pairing the monstrous hitting numbers of Bonds’ orange and black period with both the stellar defense and stolen base ability of his Pirates years, would have produced a season unlike any other seen in baseball history.

I was reminded of this thought exercise when listening to a recent episode of the Effectively Wild podcast. Hosts Ben Lindbergh and Jeff Sullivan mused on how valuable the best version of Mike Trout would be. As outstanding as Trout’s career has been, it’s easy to see how some of his individual seasons could have been even better. Trout’s best fielding and baserunning season came in 2012, whereas his best year with the bat came in 2013, and his early performance in 2017 suggests he could top that this season.

When I originally investigated the Bonds hypothetical, my methodology was simple. Baseball-Reference’s Wins Above Replacement (WAR) model is made up of six components, measuring runs above or below average in batting, baserunning, fielding and positional value (together these two values comprise Defensive WAR), avoiding double plays, and replacement level. Here are Bonds’ peak years in these categories:

To get a WAR figure for this theoretical peak season, which I dubbed an Ultimate Season, we simply sum the above figures* and divide by ten (as the approximate conversion rate is ten runs to a win). So, how valuable would Bonds have been in an Ultimate Season, where he peaked in every aspect of his game in the same year?

*(See note at end of article)

If Barry Bonds had had his peak batting / baserunning / defence (etc) performances all in the same season, he’d have had a ~18.5 bWAR season

Bonds is calculated as being worth an unfathomable 18.3 WAR in his Ultimate Season, higher than the career WAR of each of Brandon Belt, Daniel Murphy and Chris Davis. In reality Barry Bonds’ best season was worth “merely” 11.9 WAR (in 2001), good for the sixth greatest position player season of all time. The 18.3 WAR put up by Ultimate Season Bonds is an improvement of 54% on his best season, and is more than four wins greater than the position player record of 14.1 WAR in a season, set by Babe Ruth in 1923.

As it turns out, Bonds has been the only player in history capable of putting together a season of this quality, far exceeding the perceived limits of an all-time great year. Ruth (naturally) and Rogers Hornsby are the only other players whose Ultimate Seasons top Ruth’s real life record of 14.1 WAR, but both of their figures are less than 10% improvements on Ruth’s 1923 zenith. If Bonds had put together his Ultimate Season in reality, he would have smashed Ruth’s WAR record by 30%.

Nap Lajoie, Ted Williams and Lou Gehrig are the only others whose Ultimate Seasons surpass Ruth’s second best year (and the second best position player season by WAR of all time) of 12.9 WAR in 1921.

What makes Bonds’ Ultimate Season stand out even more is how much of an improvement it would have been on his real life best season. To see how unusual this was, I sorted the 114 players in our sample by the differences between their Ultimate Seasons and best WAR seasons in reality.

Edgar Martínez’s appearance high on this list is easy to explain – his best hitting seasons came as a designated hitter, the least valued position by WAR. A version of Martínez where he hits like his late-career self while playing the solid third base of his youth would have been an outstanding player. Similarly, the explosive offensive years of Mark McGwire’s mid-30s came when he was a defensive liability, whereas he rated as a comfortably above-average defensive first baseman in some earlier seasons.

The formula breaks down slightly at this end of the spectrum (the precise runs to win conversion changes slightly from player to player and year to year, which can lead to our “ten runs to a win” approximation producing slightly off results) meaning that Carl Yastrzemski and Willie Stargell originally showed up as having Ultimate Seasons worth less than than real seasons that they had. This, of course, is nonsense, and we can feel comfortable overriding the formula here to say that Yaz’s 12.4 WAR in 1967 and Stargell’s 7.9 WAR in 1971 represent their true Ultimate Seasons. It should surprise no one that Eddie Murray’s Ultimate Season is almost indistinguishable from the best year of his career (and every other year of Steady Eddie’s career).

Yastrzemski’s 12.4 WAR year is the joint third highest WAR by a hitter in one season, and the best non-Ruth season. It is perhaps the finest demonstration of an elite player at the top of his game in every category.

So, what of Mike Trout? The Angels’ center fielder has an Ultimate Season of 12.6 WAR – an improvement of 1.8 wins on his real life best, and good for the seventh best Ultimate Season of all time. He shares the seventh spot with Álex Rodríguez and Rickey Henderson, while placing just ahead of his teammate Albert Pujols and the player he is most often compared to, Mickey Mantle.

Trout’s performance in the major leagues has been nothing short of incredible, demonstrating an across the board talent that has been virtually unmatched in the history of the game. Yet, ultimately, it’s Barry Bonds who has singularly demonstrated an unparalleled excellence in every facet of the game.

*A note on the formula for Ultimate Seasons. Instead of using Runs from Fielding and the Positional Adjustment, a player’s best seasonal Defensive WAR was used. This is just Runs from Fielding added to the Positional Adjustment, except this value has already been converted into wins. This gives a more accurate figure than using our “ten runs to a win” approximation. In short, the calculation that has been used to find an Ultimate Season is as follows: (Runs from Batting + Baserunning + Avoiding the Double Play + Replacement Level) / 10 + Defensive WAR).