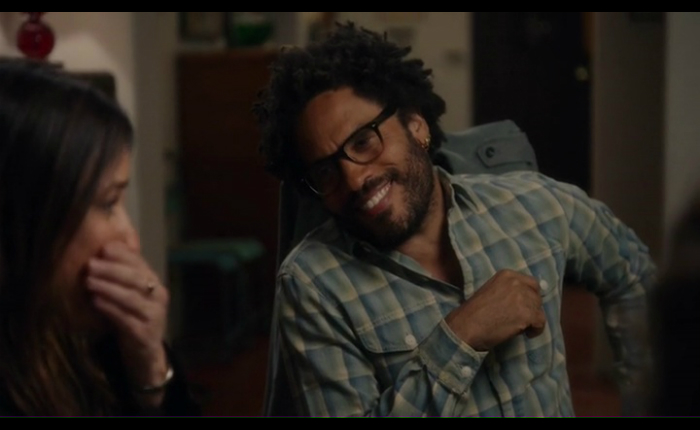 Lots of Awkward Honesty in Episode 3 of “Better Things”

Like I wrote in the pilot analysis, Better Things strives for something more real than your average neighborhood sitcom. The third episode, Brown, continues that pursuit nobly; it gives preference to honest language over artifice.

The opening scene (well, after Sam tries to unclog her toilet) sets us up for expecting “genuine” and not “acted.” We are introduced to (the real) David Duchovny—with whom Adlon worked on Californication—acting in a scene with Sam, and playing an egotistical version of himself: “Continuity’s a pussy, right?”

We get introduced to the scene by following the director Mel Trueblood (Lenny Kravitz) as he gives Sam some direction. He tells her to mix it up to try and get Duchovny to deliver a more real performance. She does so by throwing in a line of her own; when Duchovny reacts in honest confusion Mel calls “cut” and says they have it. In the first moments of the episode, Adlon is already showing us that we’re going to see reactions and not rehearsals.

Mel and Sam bond over it after the set wraps, and she invites him to her house for dinner the next day. And then takes a ride with her friend Sunny (Alysia Reiner) back to her house… only for Sunny to leave Sam with her bum husband Jeff (Greg Cromer). After Jeff tells (asks?) Sunny to “eat shit?” when she finds out he didn’t take a look at her finicky iPad, she heads upstairs. And Jeff asks Sam, “What would she do without me?” and Sam starts to half agree. She’s formulating something.

So when she starts talking about Sunny in the past tense, “she was so beautiful,” (emphasis mine), is when I started to get excited. And with good reason, because then Sam absolutely unloads on Jeff. Adlon’s monologues like this one are a huge part of what I’m starting to love so much about Better Things. Please watch before reading. And please pardon me for putting it all below, but no excerpt seemed as good as the entirety:

“I never knew anybody who had so much potential. And then, she met you, Jeff. Jesus, did she love you. And here’s Sunny, this woman who loves so hard and she tries so hard and she just ends up pouring all that love into you for years, Jeff. Do you know what that’s like? To watch your friend, someone you love, someone who is like a goddess, with the power to fly to the moon, and shine a light on the world; and she ends up using all of that power just to keep her fat, shit, useless, boring, stoner husband barely afloat. Its just a shame, Jeff.” —Sam Fox

It’s beautiful: a slow-burning statement that evolves from the most amazing compliment of Sunny into a scorching insult for Jeff. And somehow I get the feeling that Adlon is just getting started with this kind of stuff.

Now. It hurts me to skim over the phenomenal balancing of chaos that Sam does during the first minute or so that she brings Mel into her home. However, for for the sake of today’s thesis, I’ll just leave some of my favorite quotes from that powerhouse section at the bottom.

The chaotic introductions section culminates with Phyllis meeting Mel, who—it bears mentioning if you happened to not know Kravitz is black—is black. And it is incredibly awkward. In a beautifully subtle detail, Phyllis comes from the kitchen with wet hands so after they shake, Mel has to wipe his hand off.

Immediately we get a scene of Mel and Sam in the kitchen as he explains to her that—whether she participated in the civil rights marches or not—a 70-year-old women have to be alerted when the man coming to dinner is black. He says this is for the sake of the old woman, as well as the sake of the black man.

Sam fervently denies this, saying to Mel, “I think that this is your thing. It’s not real” but as an audience we have a feeling that it’s real. And it is.

The following dinner scene in this episode might be the most awkward that Adlon has delivered so far in Better Things. After Frankie reveals an embarrassing story about Max (which leads Max and Mel to actually bond a little), Phyllis decides it’s a good idea to tell a stunningly wrong-minded little story about buying “n****rbrown” pantyhose from a colored employee, ending it with “just so you know.” The reactions of everyone around the table are priceless.

As Imrie revealed in an interview with EW, it was shot to surprise the actors just like the staged opening scene with Duchovny: Lenny, Mikey, Hannah and Olivia actually didn’t know what Imrie was going to say. In the interview she says it “was like jumping into an ice cold sea.” And it is absolutely effective, the expressions on each of their faces is very real and very uncomfortable. And so is the sarcastic, I-told-you-so smile Kravitz gives Adlon after Imrie leaves the room.

In a nice bookend to the professional admiration that Mel and Sam share at the episode’s start, they share a few words of honest personal admiration. They lay it all on the table—Sunny telling Sam to sleep with him; his impending divorce; the fact that he’s about to move back to New York—but decide not to hook up. It’s real, it’s honest, it’s not the easy way out another show might have taken. The episode ends with the two of them in a long hug in Scorsese-esque rear-lights of Mel’s idling ride home.

Moments from the chaos:

“Are you gonna marry him?” —Duke (not whispered)

“No, no; why would I take your phonebook? I took my phonebook which was left at your step.” —Phyllis

“It’s just getting really difficult the way your girls talk to me when you’re not here, and I just think that they should learn some respect and I don’t know anything about—“ —Lauren (being rushed out the door by Sam)