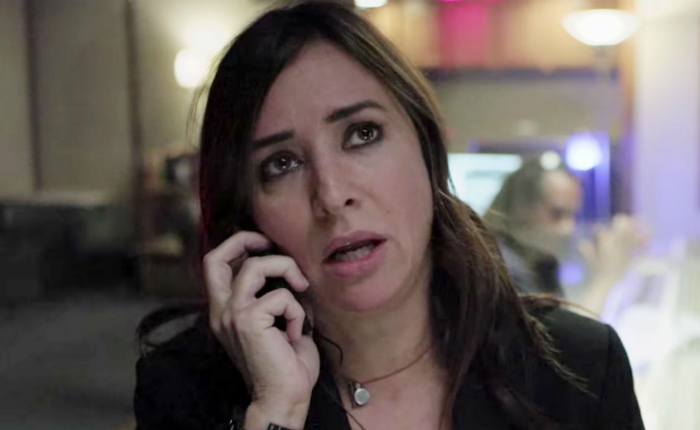 The first episode of Pamela Adlon’s Better Things is an excellent example of how a pilot should run. We see a round balance of Sam’s (Adlon’s) life that works as an anchor point for each of the stories, without forcing itself. I’d rather not over-summarize the show—just watch the darned thing—yet it suffices to say that we can expect to see Sam juggling three aspects of her life. She’s got her work, her daughters, and her love life (which seems to be the most conflicted of the three, as we’ll see.) Yet the key aspect of this first episode is that it sets up a theme which I expect will continue throughout the show. Sam—and the showrunners—are searching for something “real.”

The writing and visual treatment of the episode—directed and edited by Adlon’s co-creator Louis CK—leans more toward the cinematic style of an indie film than the standard setups of a sitcom. In an immediate critique of other shows, an early scene has Sam auditioning for a part in a courtroom drama. In the waiting room she and the real Constance Zimmer practice lines, eventually getting exasperated and asking, “I mean, who writes this shit?” which makes it abundantly clear that we aren’t about to watch a typical TV drama.

In that same scene, we get one of my favorite techniques in the show: abrupt crosscutting in the middle of dialogue to underline or contrast what’s being said. While Sam talks nonchalantly about how her daughters stress her out, we get violently thrown (by a direct cut) to several flashbacks of the night before. Sam and her oldest daughter, Max, scream at one another… and then chase after the dog as it escapes from the car. And then we’re back in the waiting room.

This cutting technique gets used in a few different ways throughout Better Things, but always to the same general effect. It illustrates the contrast between what’s happening in the present moment versus what happened in the past. It introduces depth especially because one or the other, the present or the past, seems like a lie. When Max is talking to Sam about getting high with her friend — a scene which also contains one the funniest lines about parenthood, “These things are normal, but you should be ashamed of them,” in response to Max’s over-honesty — we get a cut to some handheld vertical cell-phone footage of the two teens giggling.

“I wanna see something real. You know? Real.” — Sam Fox

And Better Things certainly strives for that, even if Sam’s porn cannot. We see moments throughout the episode which are funny because they are real; often a little too close to home for other TV shows. Sam walks out on the audition after (the real) Julie Bowen walks out of the casting room buddy-buddy with the producers. Sam and Max’s relationship is laugh-out-loud funny in its portrayal of mother and teen-daughter fighting (it’s hard to think of another time when the word “what” has had so many meanings in such little time). Nothing gets resolved nicely or painted as “perfect” in any sense. Even the title sequence reinforces the “realness” of the show with a montage of home-movie type footage showing Sam and her daughters in various handheld mediums.

In a favorite scene—the texting referenced above—we get a real time close-up of Sam’s phone screen as she responds to, essentially, a “you up?” text from her ex (named “nobody” in her phone). We see her type her messages and see the “typing” bubble of Nobody as he responds, and then ultimately doesn’t. The scene is intelligently wrapped in Joni Mitchell’s Both Sides Now and as the music fades out it is replaced by sirens and the clink of ice in alcohol. Yet, rather than letting Sam wallow in her loneliness, CK and Adlon have Sam’s youngest daughter Drew come out to the porch and call her back into the house.

As Sam said earlier, “I’m dating my daughters, they’re my love life,” and we see that she’s serious. To demonstrate how rich the show really is, instantly following this scene is a weird moment where an apparition or memory of Sam’s father leans over her bed to tell her about his day and how pretty soon he’s going to make it big, in the sort of manic Hollywood way that we feel won’t end up panning out. I for one can’t wait to see where this thread goes as the season develops.

It is an incredibly well rounded pilot, very funny, and very distinct. If it feels a little bit like Louie I think that can be attributed to how influential Adlon was in the writing and production of that show, and not just CK’s influence on this one. It’s also worth noting the great selection of music in the show—shout-out to music supervisor Linda Cohen of There Will Be Blood and No Country for Old Men—which includes songs from Joni Mitchell, The Belle Brigade, The Submarines, Slim & Slam, and a hilarious and too-stark rendition of Satie’s “Gymnopedie No. 1” by Sam’s middle daughter, Frankie.

This is a show worth watching and I can’t wait to see where it leads; and if it achieves its noble search for what’s “real.”