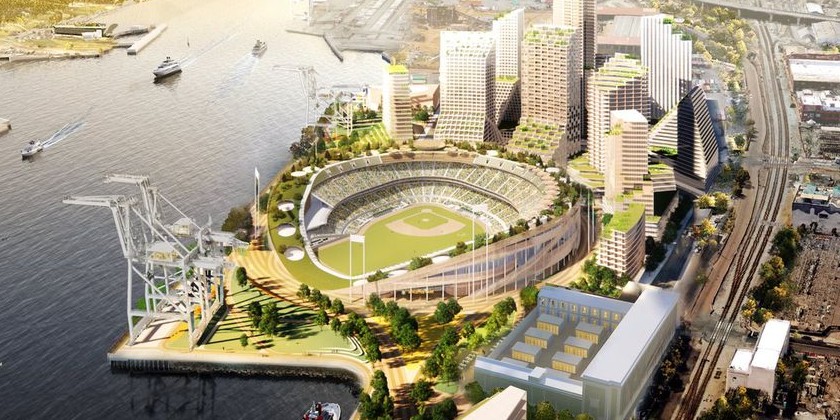 The Oakland Athletics have been pursuing a new stadium for two decades and under many different leadership groups. The most recent team president, Dave Kaval, entered the fold as the savior Oakland always dreamed of after years of missteps under Lew Wolff but missteps, setbacks, and frustrations have been bountiful under his reign as well.

The commissioner of baseball issued a statement recently that allowed the A’s to explore other markets for relocation in a last ditch effort to force Oakland’s hand. When asked why the current location — an obviously much easier venture — is no longer viable, Kaval lists off all the benefits of a beautiful waterfront ballpark but when pushed to cite specific reasons the current site won’t work he finally gives a short but powerful statement, “two teams have already left. That tells you all you need to know about the market value.”

Over the last 20 years, nearly all new ballparks have been built within an urban/downtown area and it has proved to be a model that benefits teams and their ownership groups (Kaval has been an equity member of the Fisher ownership group since 2010 when he worked for the San Jose Quakes) and the current site is nowhere near the downtown/urban setting they desire. An obvious exception is in Arlington where the Rangers constructed their second stadium in two decades in an area nobody would consider “downtown”.

Kaval says the Texas exception is actually why they had to build their second stadium in two decades as the team needs something “new and shiny” to attract fans.

Kaval admits that the originally proposed Laney College location would have required significantly less infrastructure costs but that deal fell apart and was announced prematurely before land and building rights were secured. Howard Terminal differs in that the Athletics have “an agreement with the port for the land deal,” Kaval says, “they own the land and they are on board.” He also cites three bills that passed through the state legislature and an environmental impact report that was the result of a lawsuit by port neighbor Schnitzer Steel.

When Howard Terminal was first announced, an optimistic opening day was set for 2024 but the city of Oakland has stipulated that it couldn’t be done before 2027 and that they wouldn’t even vote on the matter until 2022. The vote for a non-binding resolution has officially been set for July 20, 2021 so consider that a bit of progress. Other than delays related to the pandemic, though, Kaval cites the flood of lawsuits heading towards the A’s. Two lawsuits have already been set and recent legislation passed at the state level will speed up that process but it is still a massive barrier between first shovel and first pitch.

Although Dave Kaval speaks on behalf of the A’s organization and the ownership group in general, John Fisher is actually the majority owner of the team. Fisher is often criticized for his reclusiveness as a franchise owner as well as his seeming inability to invest in player payroll. The current negotiations and stadium search have not changed that. “We’ve been working for five years with Oakland and I speak on behalf of the ownership group and that’s how we structure our engagement with civic leaders and we’re committed to be set up in that way,” Kaval says when asked if Fisher will ever speak on behalf of his beloved team.

The A’s have certain city council members who support the stadium project but the team needs to sway the remaining members who may be indifferent, uncertain, or flat out opposed. It seems that a logical response to the Commissioner’s letter would be to publicly say, “thanks for the support but we won’t explore other locations until our options in Oakland are all dried up,” but the A’s have rolled the dice and hoped that following the playbook of the Oakland Raiders (who recently left for Vegas) isn’t going to completely turn off the voters they still need to push this project through.

“We’ve run out of time,” Kaval says in a more stern tone than most are used to hearing, “We’ve done this for five years.” The team has invested $230 million into this project before even getting a vote and Kaval cites this number numerous times in an effort to show the team’s commitment to Oakland. “Why would we spend $230 million and every waking hour of my life for five years if we didn’t want to stay?” The sentiment makes sense but it also doesn’t jibe with the fact that six markets are currently pitching to Oakland (Kaval wouldn’t say which ones, saying that MLB was prioritizing the markets) and there is an exploratory trip to Las Vegas scheduled for next week.

It’s as if the A’s are slipping a wedding ring onto Oakland’s finger with one hand while swiping through Tinder with their other hand but Kaval doesn’t see it that way. He says that “a lot of the council members are funded by maritime opposition groups” and that “we’ve made the best offer the city has ever seen” in contrast to other teams who he says never truly worked with Oakland at all. Also of note, Kaval mentioned the upcoming collective bargaining agreement (CBA) between the league and the players union. As he says it, “visiting teams don’t want to come to Oakland” due to its aging clubhouses and amenities and that it has become a CBA issue. This, more than anything, may be the main catalyst for MLB jumping in at the time they did — desperate to avoid a labor dispute a year after a shortened season.

Some sticking points that critics of the Howard Terminal project have involve the massive amount of funds needed for city infrastructure improvements. Kaval claims that all the money needed for these improvements are “project revenue but for tax revenue” and claims that it’s a very common method also utilized by the San Francisco Giants to build their waterfront park. Essentially, the only way the city generates the funds needed for the project is to approve the project so, in a way, it’s self funding even though, on paper, it is civic funds.

Another recent point of contention with some folks is the 10 year non-relocation agreement in the term sheet. Kaval insists that “most stadiums don’t have any non-relocation agreements” and that they are usually “related to public finance”. This seems like a minor sticking point that shouldn’t be a sticking point at all. If the team is $230 million deep and building a $1 billion stadium project, it’s unlikely they’re going to bolt before the investment is recouped.

If $230 million seems like a lot of money to spend on a project while the team is offering players one year, deferred payment contracts, you’re not alone. Would an investment in the team over the last 20 years, when several championship windows were wide open, have the potential to boost attendance (revenue) and civic pride (political power) at a time when the team needed both? Kaval doesn’t see that as an issue. “We’ve been to the playoffs with this payroll. We’re doing what we can with the resources we have and spent more than we ever have before. The only way we can retain these players is to right side the real revenue generator which is a waterfront ballpark.”

Dave Kaval is a masterful politician. Every answer, no matter how unrelated the question is, can end with “we need a waterfront ballpark.” While many die-hard A’s fans just want the team to stay and don’t care where the stadium ends up as long as it’s in Oakland, Kaval cites a letter he received from one of the stadiums longest tenured security personnel that talks about the fear and necessity of change. The letter’s author writes about the change that brought the A’s to Oakland in the first place and gave the city of Oakland World Series trophies, Hall of Fame players, and even white cleats. While all of this is true, a change of city is not a change any A’s fan is wiling to accept.

The fans who have dedicated their time, passion, and money to this team end up feeling rejected. If “Rooted in Oakland” — a slogan and social media hashtag that has mysteriously fallen out of usage this season — is any more than a catchy PR slogan, the team needs to prove it beyond the “$230 million already spent.”

Kaval spoke for 35 minutes. Much of it was the same spin and redirection that has been seen on every television interview or read in every newspaper article. The subtext, though, is not optimistic. Not once did Kaval — usually a cheerleader for all things optimistic and sunny — indicate any confidence that things were going to get done as they needed to be. Several times the words, “we’re out of time” were uttered. “We could play here for 10 more years 10 years ago, that’s why we signed the extension but now we can barely keep the lights on.”

He does not paint a portrait of a hopeful organization who will be a fixture in Oakland for 50 more years. Instead he appears to be a man at the end of his rope. Out of options, out of time, out of patience. Why would you spend $230 million on a project you don’t believe in? Because that’s the price you pay to prove that a city doesn’t want you and that a market is no longer viable. The only thing that will keep the Oakland Athletics in Oakland is if enough residents make it clear that this is an issue they will be considering come election time.

The A’s may have misplayed their hand by exploring Vegas prior to a vote. It may work as leverage and it may backfire on them — both are options this team seems willing to accept. If one of the council members who isn’t a definite yes vote takes offense to this and determines that a no-vote won’t hurt them politically, the A’s will be approaching their farewell season. If you want them to stay, you have to tell the people who really matter now — the Oakland City Council.

Laney College fell apart. The current site is falling apart. Howard Terminal is hanging by a thread. There are too many hurtles to overcome in too short a time to waste any more time. The A’s know it and they’re more prepared to leave than most fans are willing to believe.

*This conversation was supposed to be recorded with full audio released but Mr. Kaval had to change platforms at the last minute and no recording was made. Interview conducted on 5/21/2021