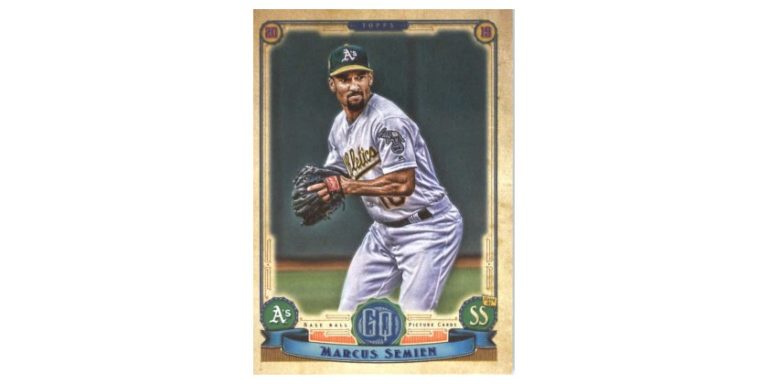 In 2014 the Oakland Athletics traded Jeff Samardzija and Michael Ynoa for Marcus Semien, Chris Bassit, Josh Phegley, and Rangel Ravelo. Samardzija was in his final year before free agency and would soon add shaky depth to the Giants organization and Ynoa has pitched in only 45 games in the majors since that trade. By virtually any measure, the trade was a win for Oakland on the field but it also created one of the great baseball stories of the past five years.

Marcus Semien had only played six games at shortstop when Oakland decided to make him their full time shortstop and A’s fans were not quickly convinced of the team’s plan as Semien led the league in errors and posted a .947 fielding percentage. Over the next few seasons, though, Semien worked hard, didn’t complain, and focused on improving his game — thanks in large part to the coaching genius of Ron Washington. In 2019, Semien finished third in MVP voting and posted a 2.2 dWAR, 7.5 oWAR, and 8.9 WAR and, along the way, became an inspiring story of hard work, good attitude, and front office faith.

But, as A’s fans are likely aware, it wasn’t front office faith at all. While the team may have loved Semien as a person and believed in his potential as a player, if there had been a better option at shortstop for the same price, they would have taken it. The fact is, Marcus Semien made $1.5 million dollars over his first three years with the team and was dependable in attendance even when his dependability in fielding was called into question. Oakland, always quick to cry ‘small market’ and ‘poor’, knew the team wasn’t a contender and Semien was a cheap roster filler who could take a beating from fans while he developed his skills on the field.

Luckily, he did hone in his skills and would eventually become a fan favorite who made the team better at the plate, in the field, and in the community. Whether his improvement was thanks to experience, coaching, or having the best corner basemen in the game, Semien had finally become the professional player he had worked so hard to become.

During his arbitration years, Semien managed to remain a steal for Oakland. In 2018 he made $3.1 million and in 2019 (his best season) he came in just under $6 million. In total, over five years, Oakland managed to pay their shortstop just under $10.6 million and in return got a player who appeared in 720 of the 810 games from that period ($13,000 per game). In his final arbitration year, Semien was payed exactly the same amount as Alex Bregman who was one of the two players to post higher oWAR in 2019. The difference, though, is that Bregman’s contract was a $100,000,000 extension through 2024 and Oakland offered a single year to the 29 year old Semien.

The 2020 season proved to be difficult for every team as revenue nearly dried up but salaries remained due. Oakland payed Marcus Semien $13,000,000 for the year and his numbers did dip defensively — probably in part due to Matt Chapman‘s absence at third for a significant chunk of the shortened season — but it’s impossible to compare 2020 stats against any other year and Semien did manage to bat .533 in the postseason for Oakland.

Fast forward to January 2021. News hits that Semien, who was not offered the $18.9 million qualifying offer, signed a one year deal with the Toronto Blue Jays for $18 million. How can this be? Nobody expected Oakland to do the right thing, nobody ever does, but nobody expected Semien to sign for a year either. Semien will begin the 2021 season as a 30 year old at the top of his game and Oakland didn’t even extend a serious offer. They didn’t even try. They never try.

John Fisher (the billionaire majority owner of the A’s, not the 16th century monk) is estimated to be worth $2.8 billion. That’s billion. With a B. He could personally finance Semien’s salary and still be worth $2.78 billion. It’s not that the team doesn’t have access to money, it’s that the bank is unwilling to pay. Sure, revenues were down last year and 2021 isn’t going to be back to normal either but this is business and sometimes, when a business is failing, the owner needs to throw in some of their own funds to keep it afloat.

John Fisher is the caretaker to a rich and storied legacy. One of the oldest and most celebrated franchises in sports history is a part of his investment portfolio but his entire legacy will be a series of “what could have been” stories with nothing to show for his investment beyond an appreciated asset. He needs to sell the team that he is so woefully incapable of maintaining.

Marcus Semien signing in Toronto is not exposing anything about Fisher that fans didn’t already know and in many ways it confirms what they already knew but it does feel like the camel’s back is breaking beyond repair. How long does Fisher expect fans to stick with a team that gets dismantled right at the point that they get good? Oakland has some of the best players in the game, which is a testament to their farm system and scouting, and there is no reason to believe any of them will still be wearing green and gold by the end of the 2021 season. It’s a disgrace. John Fisher is a disgrace.

This team has wasted millions of dollars over the last 15 years searching for a new stadium. They’ve wasted millions of dollars on contracts that made no sense to anybody (remember Billy Butler?) and, most importantly, they’ve missed far too many opportunities for success because their checkbook got lost in the back of a drawer somewhere and nobody knew where it was.

Why should A’s fans stay?

This is why Marcus Semien is the human embodiment of the entire A’s business model. You take a kid who can barely play, throw him to the lions for minimum wage for a few years, and when he and his teammates play at a championship level, you toss them aside for no return to start from scratch for cheap. Instead of fans pondering what could have been had this team not been dismantled at their peak time and time again, why doesn’t John Fisher ponder how much this team would be worth had he thrown in a little extra money and actually financed a championship team instead of selling it for parts. You can’t keep selling the wheels and draining the gas tank and then complain that you can’t afford to drive your Maserati. Open your checkbook or sell the team. Don’t let another Marcus Semien leave for nothing.

Do the right thing, John. Sell the Oakland Athletics.