For a while now, this author has been in the serious business of tweeting baseball stats. Some of those tweets are good. Some of them are great. And some are tweets about R.A. Dickey‘s plate discipline. 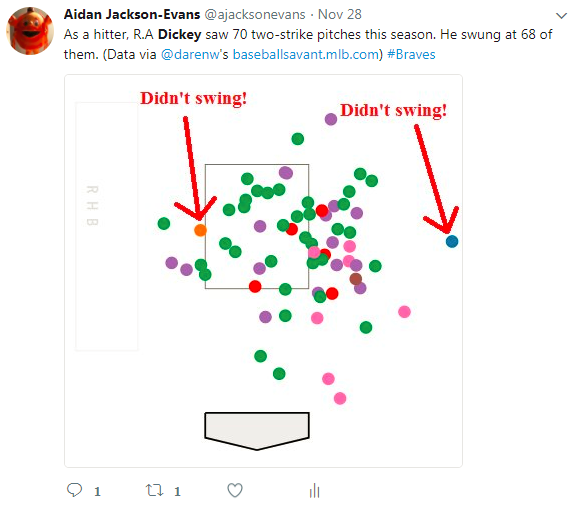 Now, one might conclude that if a tweet on the hitting approach of a 43-year-old pitcher receives but a solitary “retweet”, then that tweet should probably not serve as the foundation for a 1000 word analysis. Consider this, then, as a test of that hypothesis, because we’re going to talk about the plate discipline of R.A. Dickey.

Let’s get to the heart of it. R.A. Dickey – knuckleballer, arm ligament not-haver, and erstwhile Atlanta Brave – has a game plan at the plate. That game plan appears to be “let’s get this over with”. There have been 101 pitchers with at least 200 plate appearances as hitters in the last decade. Among this group, Dickey owns:

Take that, previous paragraph. How misinformed you were. Dickey isn’t swinging and missing, he’s trying to put the ball in play whenever possible.

It takes five seconds of watching Dickey hit to see what he’s doing. Despite what one might expect from someone who has previously named his bats after swords from epic poems and fantasy novels, there are no big hacks here – his average exit velocity was 7th lowest among the 45 pitchers with at least 25 balls in play this year. Instead, there’s just a concerted effort to get bat on ball.

That effort is amplified when Dickey has two strikes against him. Let’s take it back to the tweet at the top of the article. Dickey swung at 68 of 70 two-strike pitches this season. That’s not a new development for him. Dickey has an 89.2% swing rate on two-strike pitches since 2008 (this encompasses all but one of his career plate appearances).

Even the at bats this season where Dickey did take a two-strike pitch are illustrative of his approach. One of these two-strike takes came against Scott Feldman of the Cincinnati Reds on June 3rd. After starting off the at bat with a called strike and a a foul ball, Dickey went into two-strike swing mode: 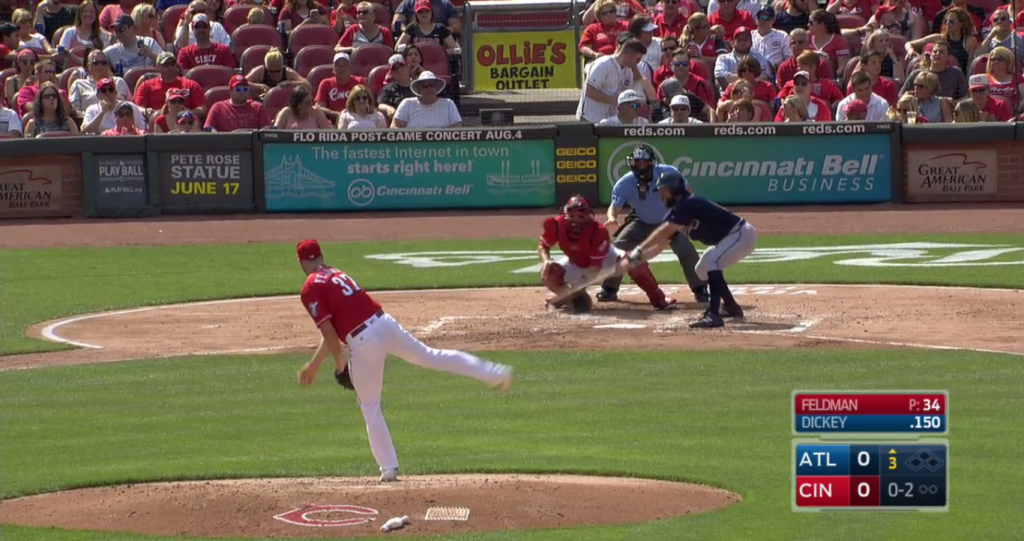 Dickey somehow made contact on this pitch. The next delivery from Feldman was a little ways off the plate. 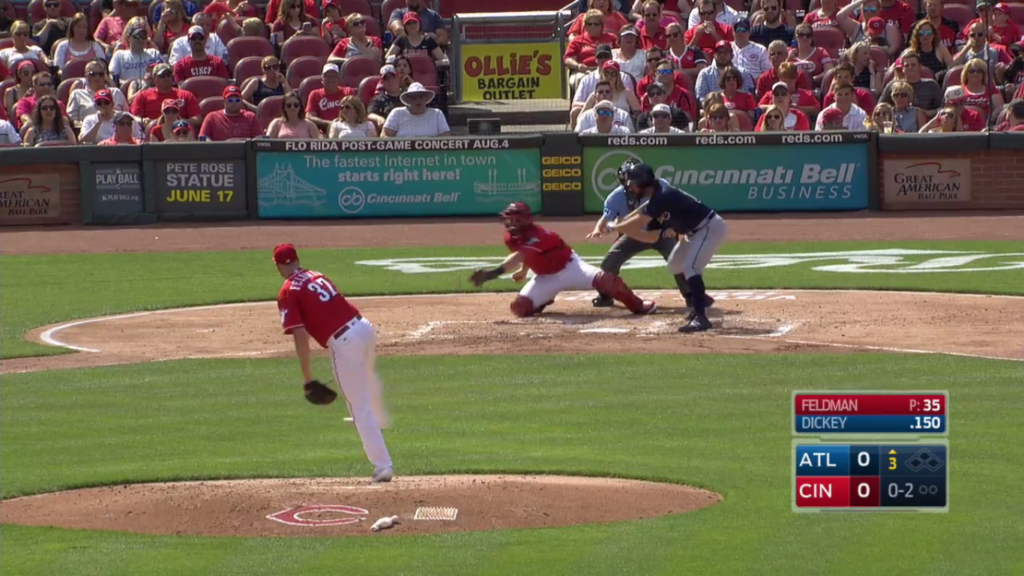 Dickey did not swing at it. Good job R.A.

He definitely thought about it though. 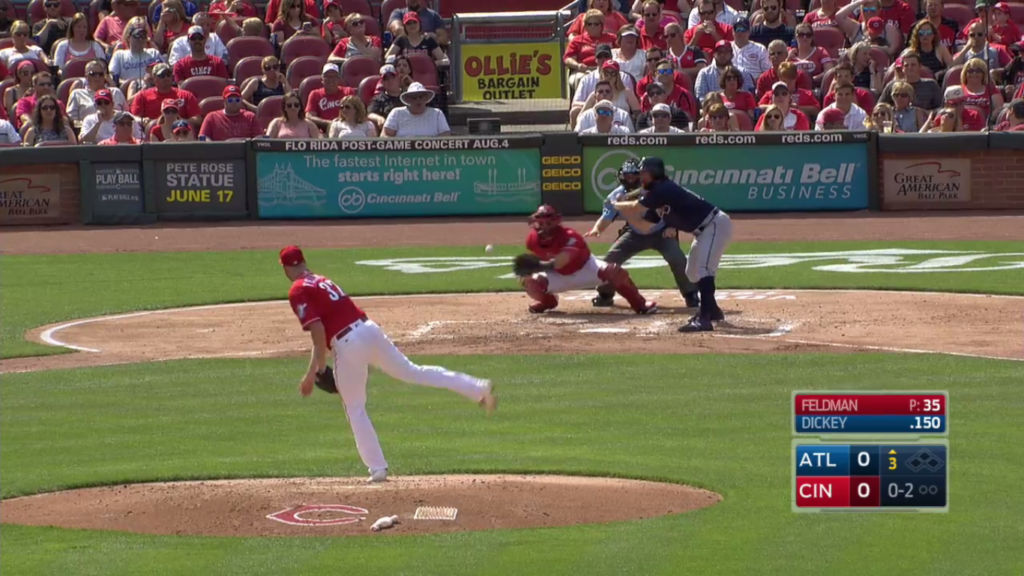 On the radio, Don Sutton offered his analysis of Dickey’s style at the plate:

“He just kind of pecks at it, doesn’t take a full swing, doesn’t wind up or hack at it. He just tries to flick it somewhere.”

After another two-strike foul, Dickey blooped a single into center field ahead of a diving Billy Hamilton. A perfect R.A. Dickey at bat. Incidentally, the pitcher with the second highest two-strike swing rate as a batter over the last decade is… Scott Feldman. Weird.

Dickey’s other two-strike non-swing came in the start prior to the Cincinnati game, against Johnny Cueto and the San Francisco Giants. After falling behind 1-2, Dickey did his thing. Foul ball. Foul ball. And then this: 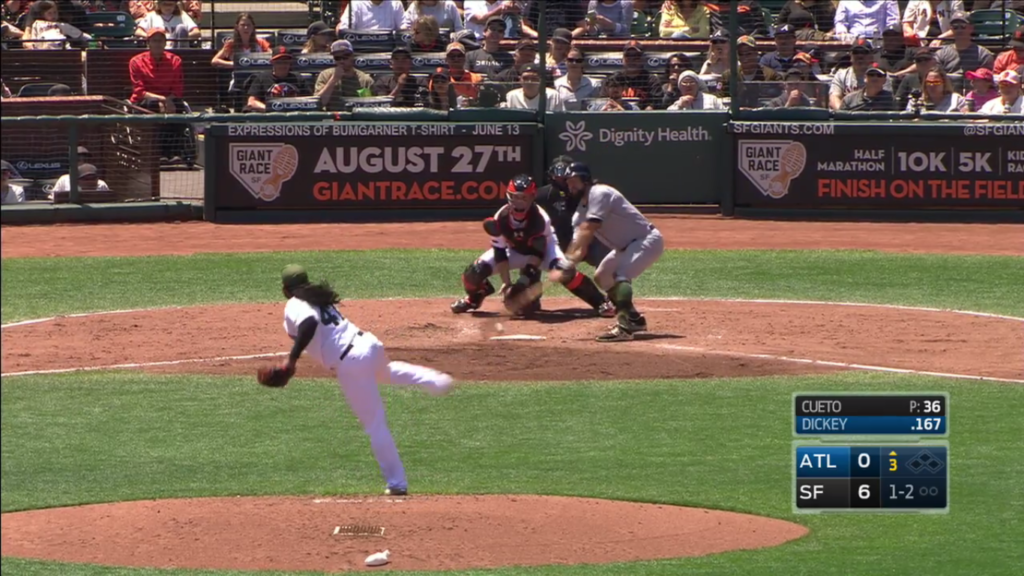 I’ve watched this dozens of times, and while I don’t think the ball bounced before Dickey made contact, it’s about as close as we’re going to get to another Vladimir Guerrero situation. For the record, Giants TV announcers Duane Kuiper and Mike Krukow had been spending the at bat talking about motorbikes before Krukow’s interest in the actual ballgame was piqued by Dickey’s near one-hopper.

On the next pitch Cueto, who had given Dickey two consecutive looks at the “Tiant” version of his delivery, unleashed his seventh offering of the at bat via the “quick pitch” method.

Remember, Dickey swung at all but one other two-strike pitch this year. It appears that, in this instance, Cueto’s mix of deliveries befuddled him. Before Dickey could adjust to the sooner-than-expected arrival of the pitch, the baseball had sneaked in for the only called strike three on Dickey in 2017.

For all the visual learners out there, here is a graph from Baseball Savant showing the number of swings and takes on two-strike counts for every pitcher (at the plate) since 2010. 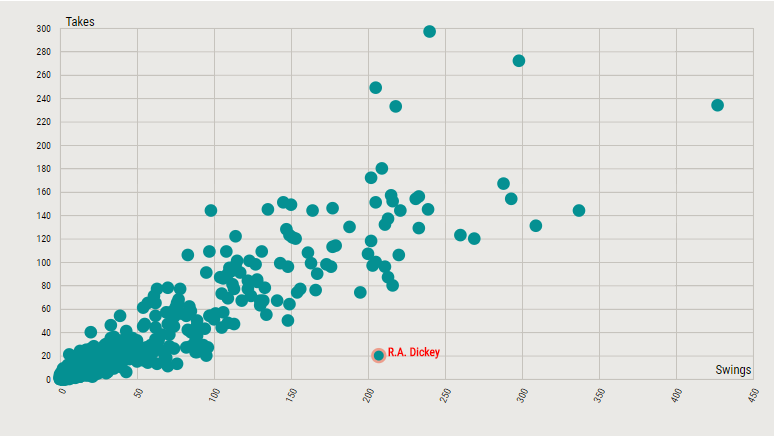 Dickey’s place on the graph should have been obvious even without the label. The consistency with which Dickey employs this two-strike approach is unmatched. Now, does this make Dickey a good hitter? On the one hand, he was third among Braves pitchers in RBI this seas… no, he’s not a good hitter. He had a .295 OPS in 2017. He had a respectable-for-a-pitcher .590 OPS in 2010, but still just a .364 OPS for his entire major league career.

But maybe this is the best version of Dickey the batter. He’s a 43-year-old who didn’t get regular bats in the majors until the age of 35. He doesn’t have the power of Madison Bumgarner or, say, Bartolo Colón, so he plays to his contact strengths. Dickey has previously ascribed his ability to avoid strikeouts to playing pepper in pre-game warm-ups.

Dickey is currently without a ballclub and isn’t a guarantee to return to the majors next season. But if he does, there will be at least one person checking in on his at bats. And maybe that one other guy who retweeted the tweet.