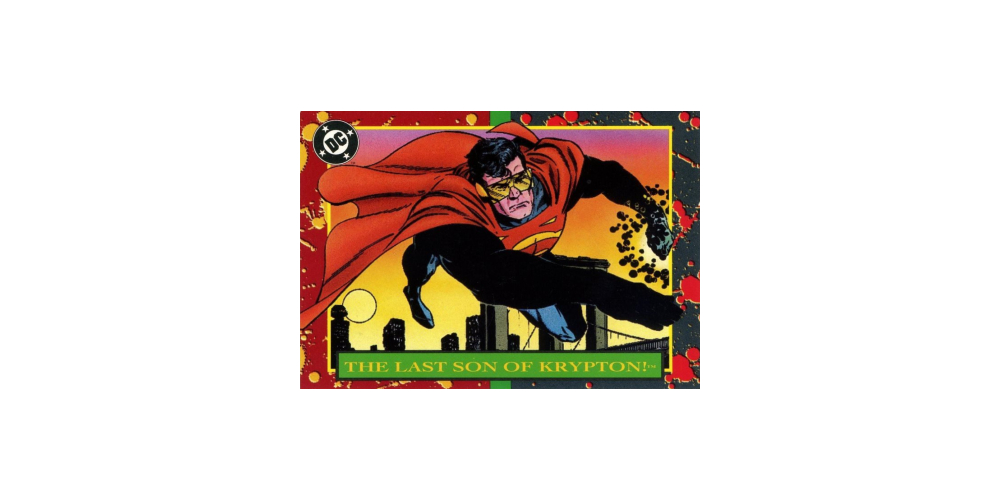 1993 SkyBox DC Bloodlines trading cards were released to commemorate a massive DC Comics crossover event, Bloodlines. The comic series introduced many new heroes into the DC Universe, many of whom appear in this collection

Most of the characters introduced in this story arc went on to be killed in future comic books making this set a strange photo album of forgotten superheroes.

This collection is widely considered one of the ugliest comic based sets of the era if not all time. The artwork is busy with a limited color palette and the borders include bright reds and blues with “blood splatter” designs.

The reverse of the first 54 cards combine to create a puzzle that is every bit as overdrawn as the card fronts. Cards 55-72 are hero profiles with a shot of the superhero on the front and a bio on the back. The remainder of the set is comprised of front and back alter-egos and more blood splatter backgrounds.

It is not uncommon to find sealed boxes in local card shops and eBay often has complete sets priced around $5. Due to the relative obscurity of most the card subjects, this set is probably only interesting to completists and die-hard DC collectors.

SkyBox released several comic-inspired sets over the years. A better example of their work from the same year would be 1993 Return Superman cards which feature much better artwork.