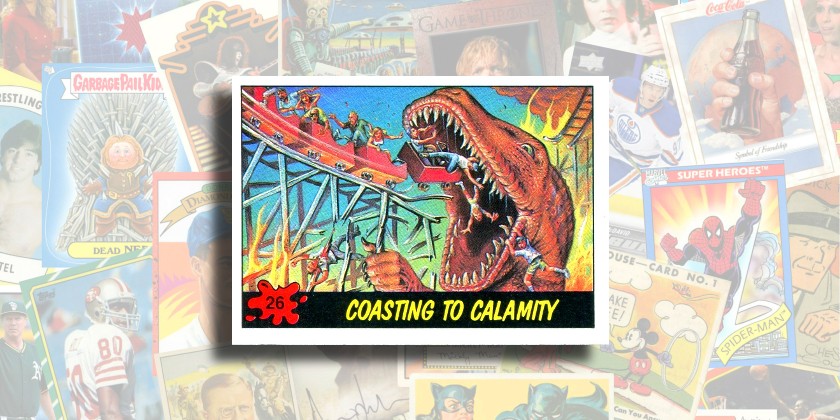 1988 Topps Dinosaurs Attack trading cards blend prehistoric monsters with UFOs and spacemen to create a pulp art set in the style and design of the classic Mars Attacks cards from the 1960s.

There is no real modern twist to the artwork as the style is very much in the vein of Norman Saunders’ legendary work with Topps throughout the 60s but the blood and guts is turned up to 11 and nothing is off limits.

Each cardback features an “above the fold” newspaper headline that tells the story portrayed on the front of the card with several different newspaper designs represented throughout the set.

Along with the 55 shocking cards, there are 11 stickers to collect. The stickers, distributed one per pack, are simple, bloodless, pictures of various dinosaurs and may be the only child friendly part of this set.

Packs and boxes are fairly commonplace as the set has developed more of a following in the years since its release than it enjoyed in 1988. Our checklist includes all of the cards and stickers in the set and can be searched or sorted by card number or title. In 2018, Topps used the packaging art as card #24 in their 80th Anniversary Wrapper Art series.