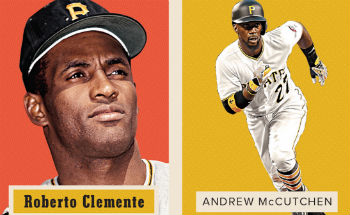 The original 1957 Topps Football set design featured two pictures of the same player, one headshot and one full body image, on the front. The Throwback Thursday cards adopt the same motif but the headshot is of one player (a classic player) while the full body is another player (a contemporary player).

Consisting of 155 cards, 1957 Topps Football had a checklist loaded with future hall of fame talent including Jack Butler, Dick Lane, Raymond Berry, and Johnny Unitas who were also among the 42 rookie cards. The six throwback cards are also loaded with hall of fame talent, both current and future. What is puzzling, though, is that in some instances the two players are chosen from the same team while other cards are not. The checklist for this week’s series is below and a full checklist for the series can be found under the tab at the top of the page.

Unlike most weeks, there is no central guideline that connects the players selected for these cards. Previous weeks have included up and coming shortstops, or the best hitters since the All-Star break but this week is simply six random Hall of Fame inductees and six random modern players, some of which will end up in the Hall at some point as well.

Topps Throwback Thursday cards are available for one week from their website and print runs are fully dependent on the number of orders received. Previous week’s editions can be found on the secondary market with prices that fluctuate a great deal. Graded cards are popping up as well and, considering their scarcity (production runs for all but the inaugural set have averaged in the 700s) the market for these cards is sure to vary greatly for a while.