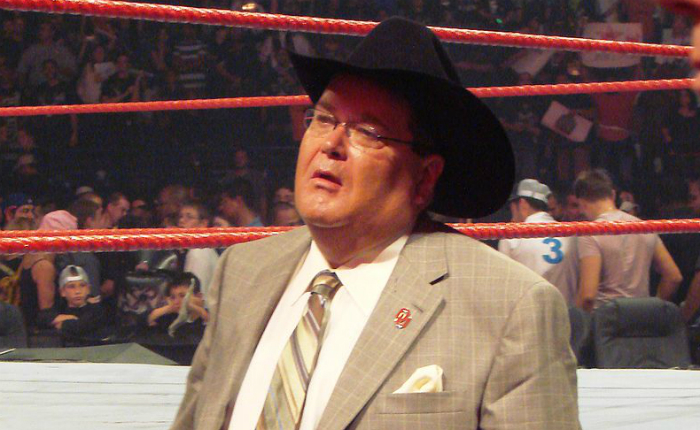 BAH GAWD! That was my immediate reaction when Pro Wrestling Sheet announced that Jim Ross aka Good Ol’ J.R. was announcing a match at WrestleMania. My second thought: Which match will the legend be calling on Sunday?

It’s obvious to think he’ll call a match like Goldberg vs. Brock Lesnar, but here are some other possible calls J.R. could possibly make:

If there’s a match that could benefit the most from the potent voice of Jim Ross (besides Goldberg and Brock), it’s this one. Roman Reigns and Undertaker in a match without props just screams snoozefest. I hope I’m wrong, but I think that’ll be the case.

Taker’s recent matches at Mania, aside from last year’s Shane McMahon Hell in a Cell match, were filled with personality, but Reigns doesn’t have much of that. He’s not as much of a mythical being as Brock Lesnar, he doesn’t have the psyche of Bray Wyatt and doesn’t have the in-ring presence of CM Punk.

So, that’s why this match makes perfect sense for J.R.

2) Karl Anderson and Luke Gallows vs. Enzo and Big Cass vs. Sheamus and Cesaro

In addition to the old-school feel Ross’ voice would add to the match, his ties to New Japan Pro Wrestling mixed with The Club would also be a boost to the equation. Once again, if WWE decides to enlist Ross in this match, it’d be a stellar fit.

3) Bayley vs. Charlotte vs. Sasha Banks vs. Nia Jax

As if the fatal four-way women’s title match wasn’t already going to be one of the best matches of the night, throwing Ross in the mix would make it a bonafide classic. And if WWE takes their women’s revolution as seriously as they’ve seemed to, Ross announcing the match would take it up a notch and bring even more buzz to the division.

Charlotte and Jax have always talked about how injury-prone Banks is and more than likely she’ll take a few tough bumps in this match and how beautiful would be it be if Ross has a “she’s broken in half!” call?

J.R’s voice would obviously elevate any match on the WrestleMania card, but I think these three could benefit the most from his incomparable voice and overall, I’m just giddy that he’s going to be at WrestleMania 33.