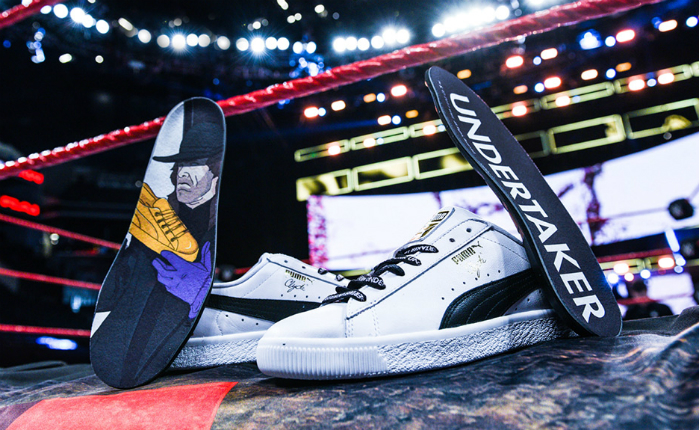 When you watch the WWE, the last thing that may be on your mind are the sneakers that the wrestlers are wearing. For the most part, many performers in the business stick to the traditional wrestling boots. But, WWE is turning heads while attempting to change that as they’ve worked with Foot Locker and Puma to release some special edition collaboration.

The Puma Clydes that are releasing will have an old-school WWE(F) logo on the back of the shoes, but will pay homage to various legends in the sports entertainment industry.

There will be six different pairs of shoes and each will represent a superstar from WWE. The wrestlers include Ric Flair, Ultimate Warrior, Andre the Giants, Stone Cold Steve Austin, Mach Man Randy Savage and The Undertaker.

The shoes will retail for $199 and will be limited, according to reports from Yahoo!, among other sneaker sites.

There will also be a special black edition for The Dead Man that will come in a special casket themed shoebox. Those, however will cost the buyer a Tombstone pile driver and choke slam (or $499, I guess).

Yes, the price definitely makes my eyes want to roll in the back of my head and it also feels like I’d be telling my wallet to “rest in peace”. However, if you have the necessary funds and are one of the lucky 23 in Orlando that get a hand on the shoes, congrats. These are expected to go fast.

There are also t-shirts that are being released the same day and those will go for $44.99

With the release coming April 1, the day before WrestleMania, the hype will definitely be real. But, when the world of wrestling and sneakers collide, everyone wins. Just ask Enzo Amore, who’s more than likely already doing his shuffle in a pair of these.