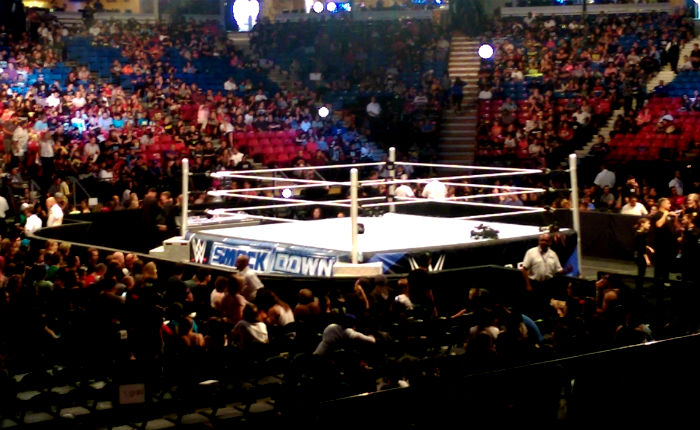 When it comes to 2016, the year was full of ups and downs in WWE. While we saw the return of Goldberg and the arrival of AJ Styles, there was still plenty to loathe, including some poor writing and some rivalries that went on long after their peak had passed.

So, what are wrestling fans to expect in 2017? There will surely be more returns and there will definitely be more talent landing in the promotion.

Here are five matches (and a bonus) that I think have the potential of highlighting 2017. While some of them may be longshots, they’re matches I personally think would leave fans talking for weeks or months — if not years.

Without further ado and in no particular order.

I know the two already did a number on each other during their rivalry at NXT, but RAW is lacking in quality heels and a Joe/Balor angle makes sense to me. It’s a chance for Balor to get some revenge on Joe and it’s a chance for Joe to prove why he belongs on the main roster.

Balor and Seth Rollins would have been a feud I would have loved to see, but with Rollins face-turn, it leaves little hope of happening, unless it’s a contender’s match or something.

Balor, who is expected to return from injury after Royal Rumble (so probably will be held out until WrestleMania), is going to come back and he’ll be looking for the Universal belt that he never lost. Let’s say Balor comes out at Mania and makes it known he wants his belt back, Joe could debut on Monday Night Raw the next day and blow the roof off the place.

Whereas many mainstream WWE fans don’t know all of NXT’s talent, pretty much any wrestling fan knows who Samoa Joe is for his work in TNA.

I think it’d be a good first feud for Joe and a nice return to action for Balor.

When you’re talking about lists, how could you possibly leave Y2J off one? Since Jericho’s return in 2014, he’s had some amazing feuds. But, now he may be most over for his bromance with KO. The two have that type of Canadian bond that just can’t be broken it seems.

Fans have been waiting for them to split, however, because that beef would be one of the best the WWE’s had in a while. The two are both prodigious on the microphone and the two could literally go for hours and never let a dull moment occur.

But, just as the two are with their words, in the ring they can both put on a show. Jericho, while 46 years old, has proven he can handle his own with any superstar WWE puts him up against. Owens, who’s billed as 266 pounds but looks to be closer to 290, is unbelievable for his size. The two fighting each other would be a huge boost for RAW and WWE in general, but the two fighting for the Universal Title would be a thing of beauty.

If WWE writers don’t make it happen, well… the name I’m thinking of calling them rhymes with shmupid bidiot.

I know this is coming directly from left field, but it’s a match I’ve thought about for a little while. Nakamura is the King of Strong Style. Rusev loves to crush, or “machka” if you’d prefer. Nakamura has shown with his rivalry against Samoa Joe at NXT that he can handle large opponents and Rusev has shown his athleticism to be exceptional for his size.

I’ve always wanted to see Rusev — and Lana of course — as a face, but it doesn’t look like that’s ever going to happen due to the European aspect of Rusev. And if they’re going to keep him heel, then you have to put him against some of the top faces to keep him relevant. While I don’t see Rusev getting much of a top-tier belt opportunity, he can easily win the US Title once again and if Nakamura makes his main roster debut next year, it’d be a belt he could instantly contend for (if not the Universal).

I could see the two having some great four-to-five-star matches for sure. Just think about Shinsuke weaseling under Rusev’s legs while he tries to put him in The Accolade and then a Kinshasa hits Rusev square in the face.

Maaaaan, with the way Sasha sells and the stiffness of Asuka’s move-set, this would be an unbelievable match. Asuka has torn things up in NXT, taking on Nia Jax, Bayley and whoever else and laying them all out.

Her unbelievable personality paired with The Boss’ bad ass attitude would make for a hell of a series of promos leading up to the first match. This would keep Sasha out of the Women’s Championship discussion for a while, but I think that’s necessary since the Charlotte/Sasha angle has completely run its course.

Asuka, when she gets the bump to main roster, will more than likely come up as a heel which fits with Sasha’s face style at the moment. I’ve liked Sasha as a heel more than face, but if she stays on her current path, this could make for a great battle.

The Glorious One against the Show Stealer. Talk about a match for the ages. Ever since Roode’s first NXT Takeover entrance, he hasn’t come down from the podium. He’s been near the top of his game on the mic and in the ring, putting up legit matches with Andrade Almas and Tye Dillinger in the last couple months of ’16.

Ziggler hasn’t been able to get the World Championship since the brand split, but he has remained in the hunt. His most recent attempt being in a triple threat match (which I thought was amazing, by the way) along with Styles and Baron Corbin. A feud with Roode would be one for the ages.

Ziggler is out of title contention for the moment and while Roode is currently the top contender in NXT, he’s more than ready for a jump to the main roster.

1) AJ Styles vs. The Undertaker

If there’s anyone who did more in the WWE in 2016 than Styles, I must not have been paying close enough attention.

After making his debut at Royal Rumble, Styles instantly launched into the elite category. After losing to Jericho at Mania, he would defeat Y2J in a fatal four-way to become the No. 1 contender. After failing to defeat Roman Reigns, Styles turned heel on John Cena when Cena returned prior to Money in the Bank.

Styles aka The Face That Runs the Place aka The Champ That Runs the Camp is literally the best thing going in all of WWE and while many have said Cena will be the one to face Taker at Mania, I’d prefer this match.

Styles and Cena will face each other at Royal Rumble at the end of January for the World Championship. I’m hoping that Taker interferes and costs Styles the belt. It’s obvious Styles nor Cena needs the belt, but Cena with the belt gives some other wrestlers an opportunity for it while giving Styles the best match of his early WWE career.

Styles comes out on Tuesday and verbally abuses Taker, using every insult in the book and bringing up Brock Lesnar’s victory over The Deadman at Mania three years ago.

At Mania, Taker and Styles battle and with some interference from The Club, who also take out Kane, Styles comes away with a career defining victory.

Although some of these matches may be stretches, I think all are possible. If you have any ideas, any questions or thoughts of your own, I’m more than open to hearing about them. Happy New Years to you all.