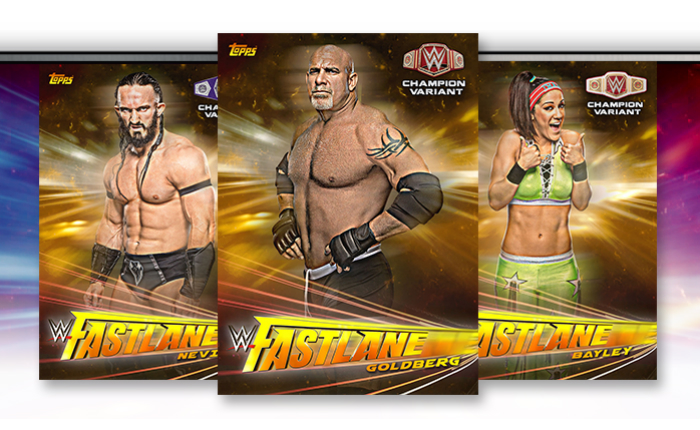 Outrageous. Ludicrous. A mockery. These are just a few of the “PG” thoughts that went through my head after tonight’s WWE Fastlane PPV. The “Attitude Era” opinions of mine are a much different story and wouldn’t be suitable for most.

But, we’ll start with what I enjoyed from Fastlane. Don’t worry, this won’t take long.

I had hoped that this match would live up to my expectations and it completely did. It had comic relief in Gallagher who has been over since the first time he popped up on WWE Raw, but it also had some excellent wrestling moments. Neville’s finisher is the furthest thing from what a heel should do, but I love it. It’s a tremendous top-rope move, but Gallagher surprised everyone when he went airborne during the Cruiserweight title match.

Gallagher hit Neville with a pair of headbutts that all, but sealed the deal, but Neville was able to fend off the gentleman’s brutal blows to get the win.

The cruiserweights division hasn’t been able to hit its stride the way I think WWE had hoped, but this match elevated it a bit. And with the Austin Aries teasers weekly, it’s easy to expect the division to get even more interesting in the future. I chose Gallagher to win due to the constant shifting of the belt, but am glad WWE chose to allow Neville to keep his purple belt that matches his attire so perfectly. It was a good decision, especially since it would have marked the fifth champion in less than eight months.

The Club (C) vs. Enzo and Big Cass

The ending to this match was a thing of beauty. The heelish victory literally made me clap as I watched Doc Gallows yank Enzo’s foot off the rope as Karl Anderson got the pin. The match seemed very routine with not a lot of overwhelming spots, but it was a quick moving match that was entertaining.

Also, Matt Hardy tweeted to The Club after they had retained to further tease a return to WWE. Just thinking about a feud between the two gets me all giddy. Especially with the Hardys’ beef with The Young Bucks as of late.

I can’t say I really liked this match, but compared to some other matches they’ve had this was very close to the bottom. Sasha Banks’ involvement furthers the idea of a fatal four-way at WrestleMania so that’s expected, but the match itself was just sort of slow. Some botches made it very unappealing as well. I won’t say I didn’t enjoy it because it’s tough to not have a smile on my face when I think of those wacky, waving inflatable arm flailing tube men. (Full disclosure: I just smiled while typing that.)

I did, however, want a Sasha heel turn as she stood in the middle of the ring with Bayley, but I’ll just have to wait for that. The next step in this feud, though, has to be Charlotte stirring the pot between Sasha and Bayley and ultimately leading to some tension between the two as they prepare for Mania. Nia Jax already has a win over Bayley so that’s how she’ll get thrown into the mix to round out the four-way match.

Rich Swann and Akira Tozawa vs. The Brian Kendrick and Noam Dar

This match was decent. I mean, it wasn’t spectacular and it wasn’t bad. That’s really all I have to say about it. Swann’s hips don’t lie, that’s for sure and Tozawa got in a little of action as well. Sorry, I just can’t get behind these pre-show matches for the most part.

We all knew the split between these two was coming. Their affiliation had literally gone nowhere for months. WWE writers basically said, “hey, you’re both not American. How about you guys become partners?” because that’s what the lazy ass writers do. Rusev should have turned face a long time ago. He has the mic skills, the wrestling ability and a beautiful manager. The only thing stopping him? Those damn U-S-A chants and the stereotypical racism that is seen in the WWE.

I mean, there’s nothing else to say about it. Cesaro is a great wrestler and he embarrassed Mahal. Big Show should have retired years ago, yet WWE is building him up like he’s Captain Insano from The Waterboy. I don’t care that he’s lost 150 pounds (aside from for his personal health because that’s awesome), he still can’t wrestle and he’s been irrelevant for over a decade.

Not a bad match if you hadn’t seen their work at NXT, but since I have, I filed this under the “ehh, that was weak” category. Once again, not really a knock on the two, just thought it was a lazy match and obvious result.

I think Nia Jax can be a monster in WWE. But, then again I think she’s a slow-moving pile of trash in a wrestling family bloodline that basically gives her a guaranteed contract just for being pacific islander. I really hope she can become a dominant female in WWE because she has the looks. But, she could stand to lose some weight and get more in shape. Sasha carried a boring match and that’s about all I have for this one.

Talk about monster. Braun Strowman literally should never lose. I don’t care who he’s wrestling. He’s physically dominating and makes me feel unsafe while I’m sitting on my couch. He has proven he can put on a good match and while he doesn’t have the mic skills, he can do enough talking to the point where you want to see him destroy someone.

I have been an avid Roman supporter for years. I thought he’s gotten a bad rap, but tonight, I officially turn my back on Roman. After being put through a table by Strowman, he gets up and hits Strowman with a spear before Strowman can stagger into the ring. W. T. F. The move Strowman hit on Roman would have had good ol’ J.R. screaming at the top of his lungs “BY GAWD. REIGNS IS BROKEN IN HALF. HE MAY BE DEAD”. But, in Vince McMahon’s WWE, Reigns (the super hero that he is) gets up like nothing ever happened.

It was infuriating watching that. I’m hitting the keystrokes on my computer furiously right now. Next match.

What an absolute joke. Kevin Owens has been the reason I’ve continued to watch Raw as SmackDown defecates on them week in and week out and the company disrespects him like that? I mean, Jesus Christ, no wonder so much talent leaves the company. Goldberg is a terrible wrestler. He’s never been good. He has an awesome entrance, great theme music and a hell of a snarl. But, that’s where it ends. He shouldn’t be holding a WWE title, especially one that wasn’t even over. Owens hadn’t done enough as a champion to get the Universal Title to a prominent standing and then Goldberg comes and brings it down even more. Now, the set-up is a couple of part-timers going at it for about 4 minutes for the top belt in the Raw brand. Absolutely atrocious.