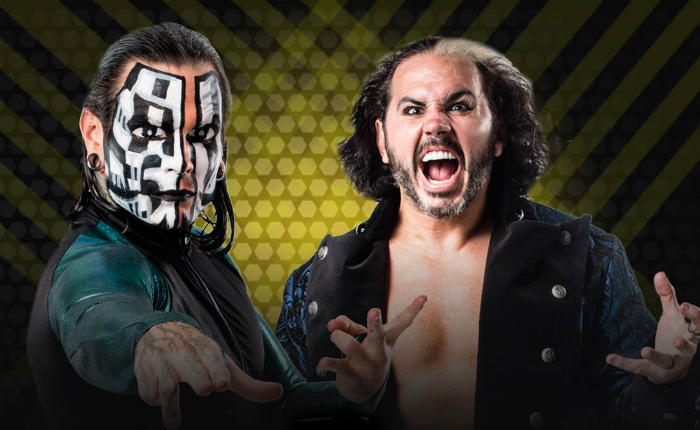 Last year the WWE had a brand split; this year they may become just a bit more “broken”. And I mean that in the best way possible.

Yesterday, rumors began to arise that the Broken Hardys (formerly The Hardy Boyz) could be leaving TNA for WWE when their contracts expire in March— yes, as in two days from now.

Dave Meltzer mentioned the duo could very well return to WWE on the latest Wrestling Observer Radio, while John Pollock, who is associated with Anthem Sports and Entertainment, who now own TNA tweeted this:

It’s not certain that the two are returning, but with the brothers scheduled to face The Young Bucks or Bucks of Youth, depending on your fragility, the day before WrestleMania, they’d already be on location to DELETE any tag teams WWE places in front of them at the WrestleMania 33.

Broken Matt Hardy has absolutely dominated the Twitter and YouTube world since changing his gimmick to the broken persona and when his brother Jeff turned into Brother Nero, they elevated to a level they hadn’t reached since they were doing Swanton Bombs off the top of ladders for WWE in the early 2000’s.

While the characters the two play are either loved or hated, they’re fascinating and some might even say they are Wyatt-esque. They’ve been the stars of TNA for over a year and have put on must-see promos and matches that are completely unlike anything on television, with balls of flame being slung, highway chases and more becoming a natural, weekly occurrence.

While nothing is set in stone, as already mentioned, Broken Matt Hardy had some cryptic tweets today.

It shall be an INTRIGUING week for the professional wrestling industry. pic.twitter.com/8pDkzwJu3y

With the hosts of WrestleMania, New Day, not currently engaged in any storylines, a feud between the pair could be a gift from up above. The two teams are both beloved by fans, however, so I’d assume the Hardys would have to play the heels in the rivalry (especially since New Day is so kid-friendly).

The mind begins to wander as the rumors continue to pour on and the only thing I hope is that Vince “Meek-ma-hone”, as Broken Matt says, gives them enough control to keep their personas hot.

Signing the Broken Hardys would be a thing of epic proportions for the company that let them walk almost a decade ago. Who do you think the brothers should feud with if they sign with WWE?