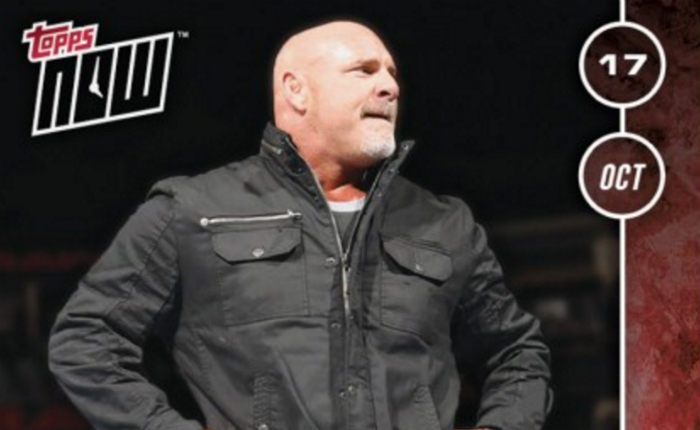 Who’s Next? Goldberg Returns to WWE

After a 12-year hiatus from WWE, Bill Goldberg, better known by just his last name, returned to WWE, and is now the subject of a Topps Now WWE card.

And the crowd went NUTS. (As you can see from a couple Tweets)

“You’re LAST.”
One of the coolest, most dynamic narrative stakes set-ups ever in wrestling. Gunslinger shit. Bravo WWE, and @Goldberg.

Goldberg coming back to #WWE …that music. Childhood feels. GOOOOOOLDBERG

Goldberg, to most, is known for being one of the baddest dudes in all of professional wrestling (if you’re too young to know about Goldberg, I advise you watch YouTube all day today to get a better understanding). Goldberg had a 173-match unbeaten streak to begin his career in WCW and after going to Japan for a couple years after WCW’s buyout, Goldberg then made his mark in WWE in 2003.

During his time in WWE he earned the World Heavyweight Championship after defeating Triple H. But neither that win, nor his win against The Rock at Backlash are what he’s remembered for in WWE.

It was his battle against The Beast Brock Lesnar at Wrestlemania XX that many direct their attention to.

With WWE 2K17 boasting Goldberg as the front-man, you had to expect some type of stunt to bring attention to the game, but a full on challenge from Lesnar’s Advocate, Paul Heyman, set up Goldberg’s appearance last night on Monday Night Raw.

And it was there, that Goldberg announced that not only would Brock Lesnar be next, but that he’d be his last opponent.

While Lesnar has been the man to single-handedly destroy pretty much anyone that’s been thrown his way, including The Undertaker and his perfect Mania record, Goldberg has the one-up on him after his victory at Mania XX.

So what’s the plan here? Well, I think the only thing that is obvious is that Lesnar will be evening up the series with Goldberg. The match may not be as big as their meeting in 2004, but if that “Goldberg” chant didn’t hit you, you may want to give a call to your local doctor because it was chilling.

Just imagine when Goldberg hits that spear on his first victim in the weeks leading up to Survivor Series? That’s going to send fans into an absolute frenzy.

While I don’t think the two can put on a show-stealing match, this is nostalgic on a whole ‘nother level and the Raw shows and Heyman promos that will build up Survivor Series will make it all the more sweeter.

Suplex City vs. The Jackhammer. I’m on the edge of my seat just typing this.

My only question now is: Where’s Gillberg?