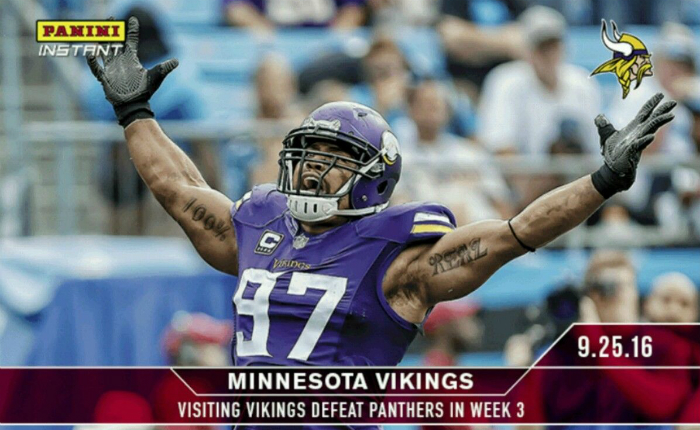 Vikings Defense Proves They Can Play With Best

Defense wins championships. It’s been quoted ever since that one guy said it that one time. But, how important is that in the NFL? Two of the past three years, the top defense in the league has won the Super Bowl.

While the NFL has been making the game easier for the offense for quite some time, defenses have proved that if you don’t allow points, you can win games (amazing idea, right, mind-blowing, I know).

The Minnesota Vikings may be the next team to prove that theory.

With Sam Bradford at the helm and Adrian Peterson on the sidelines, the Vikings are now 3-0.

Their offense is 28th in the league in passing, 32nd in rushing and 31st overall. But, they’re in first place and have already earned solid wins over their division rival Green Bay Packers and over NFC Champs from 2015, the Carolina Panthers.

In that game against the Panthers, which was commemorated this week with a Panini Instant card, the defense proved they can not only play with the best but devour the best. The team allowed 10 points in the first quarter and nothing else for the remaining 45 minutes as they endlessly pressured Cam Newton and forced turnovers.

In the Vikings’ wins against the Packers and Panthers, their defense allowed 12 points per game (altogether they’ve allowed 13.33 points per game). In a league, where the average points scored per game in the NFL is about 23 (22.84), that’s going to earn you plenty of wins.

Their defense already leads the league in sacks, with 15 in three games, according to Yahoo and has forced 10 turnovers already, as well.

The Vikings are also top-10 in rushing, passing and total yards allowed.

The team’s 2015 draft pick, Trae Waynes, has followed up his rookie season in which he had no interceptions, with two picks in the first three games of 2016.

Second year man Eric Kendricks has also performed well for the defense, but Vikings safeties, Andrew Sendejo and Harrison Smith, who are first and third in tackles on the team, respectively, have helped solidify the secondary. Smith earned Pro Football Focus’ highest ranking of any Viking in week one and Sendejo was third on the list.

The Vikings may have been overlooked, and quite frankly laughed at when they added Bradford and gave up a first-round pick, but so far this year, the team has looked like a quality contender. With Peterson out for a couple months, the Vikes will definitely need Jerick McKinnon to step up. McKinnon is only averaging 2.8 yards per carry so far this year.

Even with an outstanding defense, Minnesota has to get some type of performance from their offense and if they do, they could continue to roll and would be a serious contender in the NFL.