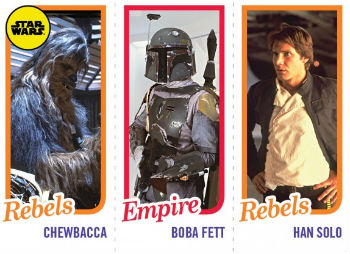 Topps’ Throwback Thursday is taking a break this week, in terms of focus and number sequence, to bring the first round of “inserts” to the popular online exclusive. This week features a Star Wars throwback of six cards in the style of the 1980/1981 Topps Basketball set.

What makes the original set so unique is that each card was perforated and could be divided into three smaller cards. The smaller cards, essentially tobacco cards, were numbered individually and combined to make an expansive set. It also happens to have the rookie cards for Larry Bird and Magic Johnson if that kind of thing means anything to you.

989 sets were ordered and produced making the Star Wars throwback the second best selling set in this series (following only the first week of release).

Star Wars has proven to be a profitable franchise for Topps, which should come as no surprise to anyone. With several physical sets of varying levels of quality released over the last two years and an incredibly popular mobile trading card app devoted to the franchise, Topps has thrown a lot of resources into their biggest non-sports license.

This particular set does exactly what many had hoped from the Throwback Thursday concept by blending sports with entertainment, as did the third release which combined baseball with television westerns. The numbering for the Star Wars throwback is not in sequence with the baseball cards so, for the sake of our checklist, we are considering these an insert set.

You can use our checklist to see the breakdown of characters per card and keep up to date with final print runs as they become available.