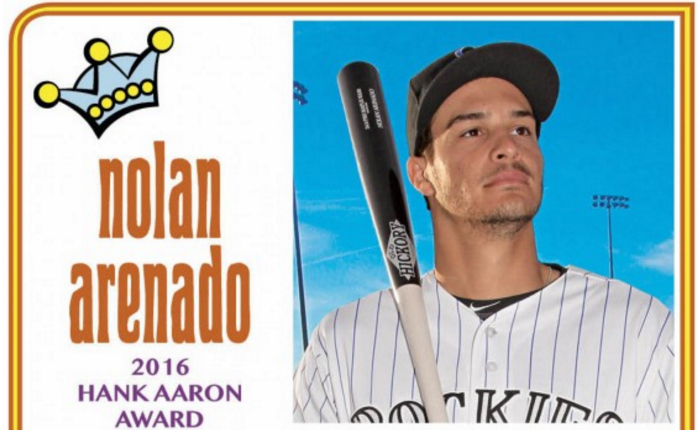 Topps’ Throwback Thursday cards have, typically, thrown back to entire sets or subsets but for their week 20 series, they’re throwing back to one specific card to honor the 2016 Hank Aaron award nominees.

The first card of the 1974 Topps baseball set paid tribute to Hank Aaron who was set to beat Babe Ruth‘s long standing home run record early in the 1974 season (he finished 1973 one run shy of matching the record). Aaron was also the subject of cards #2-6 of that set with each of those cards highlighting four different years of his career to that point.

This week’s Throwback Thursday set takes the design of card #1 and places six of the 2016 Hank Aaron award nominees in his place. The checklist for these cards is

30 players in all, one from each team, are nominated for their skills in the batting box and a winner from each league will be announced during the 2016 World Series. This is the 17th year for the Hank Aaron award which was launched in 1999 for the 25th anniversary of his record breaking feat.

Although there are 24 other nominees for the 2016 Hank Aaron award, Topps chose six players who are regular inclusions in the Throwback checklist. Bryant appears on four cards, Seager on five, Trout on four, Ortiz on seven, and Altuve on three. This is only Arenado’s first card in the series and, adding this week, this particular grouping of players now appears on 29 of the 113 cards.

As with all Throwback Thursday sets, these cards are available exclusively on Topps’ website and for only one week (Thursday to Thursday). Their limited release typically means that between 500-750 sets are printed (the exclusion being the inaugural set which sold over 1,600 copies).