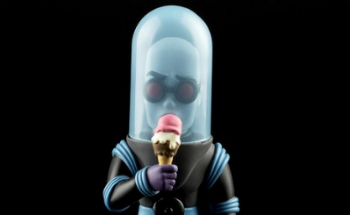 Quantum Mechanix, or QMX for short, is bringing new life and creativity to the collectible figurine market with a growing inventory of PVC figures based on pop culture’s most iconic characters. Four figures dedicated to the heroes and villains of Gotham City have been released thus far with, no doubt, more on the way.

What sets QMX figures apart from other popular brands is the attention to detail and characterization. Also, the use of PVC instead of vinyl, which is used by the largest producer, allows for a more vibrant color pallet as well as different levels of opacity which adds to the potential detail elements.

Among their many DC Comics related figures, QMX has released Batman, which was included in a Loot Crate packaging, Catwoman, Mr. Freeze (with removable head dome), and Poison Ivy. All QMX figures are designed with humor and in various poses which makes them look great on your shelves or on your desk right next to the computer you read this website on. They also come with a dry-erase speech bubble that allows you to make the characters say whatever you’d like.

QMX has announced the release of a Harley Quinn figure inspired by the new Suicide Squad film. With a cynical grin and a smoking baseball bat, this figure is sure to be popular among collectors.

QMX produces a number of other collectibles including movie prop replicas, fine art prints, pins, and traditional action figures but these small figures are the cornerstone of their output. None of the Batman figures are currently sold out from the QMX website and they can be easily found on eBay for retail value. These may not be as instantly collectible, in terms of value, as some other releases (the Firefly Kaylee Frye LootCrate exclusive is currently their most valuable figure) but any Batman fan will love the way these figures look in their collection and, ultimately, isn’t that what it’s all about?

If your local comic/toy shop doesn’t carry QMX figures yet, you can purchase these figures on their website or via the eBay links at the bottom of this page.