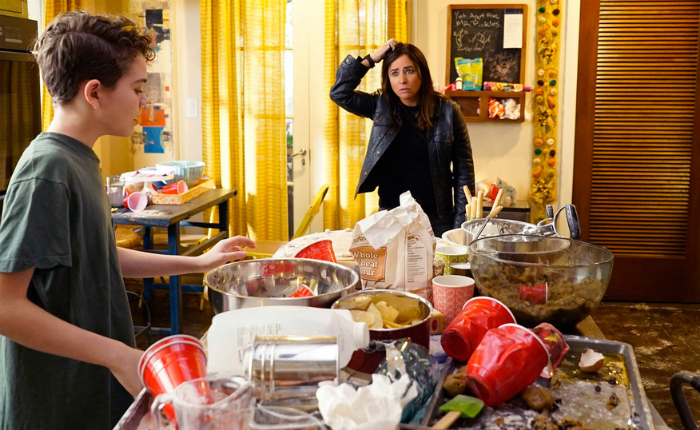 Motherhood in Episode 2 of “Better Things”

It should go without saying that the following needs to be taken with a grain of salt: as a male writer my only experience with motherhood is that I have a mother.

“Period,” the second episode of Adlon’s Better Things, is all about strong moms. It starts off with a bang in a scene of Sam getting a check-up with her pregnant gynecologist Dr. Okoye (Cleopatra Coleman). Rather than talk about herself, Sam wants to talk about the baby, but gets stumped when she tries to remember what the baby’s dad does, and Dr. Okoye has to explain that he’s a writer, or— “he’s trying to write,” which paints a clear picture of who bears the financial responsibility of the two of them.

And this is the sort of thing we see throughout the episode. Sam is unquestionably the one keeping things together, and though she’s struggling—and who wouldn’t—with her three incredibly strong-willed children, she’s not falling apart. She’s making headway in the world. At the end of a stellar performance in the car with Max, Sam straightens some of the teen’s misconceptions on that fact, yelling, “your father, lives better than I do! And I paid for all of it!”

The design of the episode seamlessly weaves three generations together. It shows—with no neat little bows—how each generation of women is equally frustrated by and yet needs one another. There are two ironic illustrations, and it’s tough to decide which to start in on because of how they relate.

The first is between Sam and her mother (Celia Imrie) who lives across the street. Initially she doesn’t want to talk to her mom and blows her off. But when she gets inside her home—a day early—and sees that Max has thrown a party and destroyed the house, she has to call her mom back. When she finds an unused condom under Max’s bedside table, Sam asks her mother if she has any vodka.

(I won’t go into it here, but the next scene which has Imrie telling a story about her character before she met Sam’s dad is phenomenal.)

The second ironic illustration follows that same condom, which Sam elects to leave under the table rather than talk about: a move showing she is strong enough and trusts her daughter enough to let the teenager make her own decisions. Yet at the end of the episode the condom becomes vital. Sam is hooking up with a guy who called earlier in the episode (we get only a cutaway to the rear-view-mirror reflection his sunglassed-face as he drives) to tell her, “If you can meet me tomorrow somewhere at ten in the morning than we can do it, maybe even twice.” When it turns out he doesn’t have a condom, Sam makes a quick run to her daughter’s room to grab the one she left: a little treat for not having brought it up in the first place.

At the climax of the episode (why are you reading this if you haven’t watched yet?) Sam goes on stage at Frankie’s school to give a speech on Girls’ and Womens’ Empowerment. After faltering at first after an awkward climb up onto the stage, she abandons the microphone, and asks the all-women’s audience to raise their hands if they have gotten, haven’t gotten, are currently getting, or have stopped getting their period. It’s an awkward but powerful moment of bonding, and we get to see women of all ages participating after some encouragement.

A testament to small details the writers of the show focus on, Frankie yells “Mom!?” in embarrassment; and then when Sam’s own mother doesn’t raise her hand to the menopause question, Sam has to call her out with another “Mom? Mom.” It is a clever way to show both of their relationships with their own mothers, and it also seems to be a motif in the writing. A line gets repeated again almost right after itself, but in a slightly different circumstance to highlight the difference. (For another example, see the scene in the pilot episode where Sam is in the cartoon ADR session.)

Sam ends her speech with some wisdom that feels like an accumulation of what she’s gathered—at the very least—over the episode; and probably over her life:

“Look we’re all girls, and we’re all women; and we all bleed, and we all suffer. And then the bleeding stops, and we still suffer. But you’re gonna find your own path because we’re tough, and we can take it. And as long as you believe in yourself, and you take care of each other, and watch out for each other, you just make the rest up as you go along. That’s all there is to it!” — Sam Fox

And as the crowd cheers she hops off the stage like a rock star, a demonstration of her boosted confidence from the uncomfortable amble-up at the start. In a character that is already so strong, it’s also nice to see these little breakthroughs, and it’s a big part of what I like about the show.

P.S. — If anyone knows why Frankie counts off “Donner”s to herself while Sam talks to Mrs. Donner, please let me know in the comments.