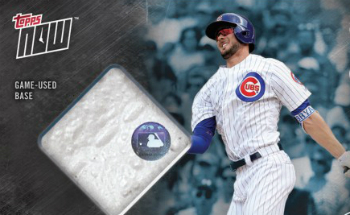 If you spell Chris a weird way and play baseball in 2016, the odds are pretty good that you are hitting a lot of home runs this year. Kris Bryant hit two during his 5 for 5 game last night and brings his yearly total to 30 with about six weeks remaining in the season.

Topps, in what has become a weekly tradition, is honoring Kris Bryant’s great game with a series of limited relic cards through their Topps NOW series. Topps NOW cards are available for 24 hours and are printed based solely on demand but when they do relics, in this case a piece of a game used base, the cards have specific print runs.

Card #370 is the base card honoring last night’s game (and will be printed based on sales) and the five relic cards are varied by color.

The red and yellow relics were sold out in less than an hour and, if previous relic cards are a trend indicator, the rest will soon follow suit.

Kris Bryant is one of the hottest young players in the game right now. He has appeared in 117 games and has a batting line of .296/.392/.564, an increase in every stat over his rookie season. Among National League hitters, Bryant ranks first in WAR (6.1), Runs Scored, Home Runs, and Runs Created while ranking in the top 10 of virtually every offensive category.

The Chicago Cubs are enjoying a healthy lead in the NL Central division and Kris Bryant looks poised to make another run for MVP, having finished 11th in 2015 voting, the same year he won Rookie of the Year.

This week’s 5-hit, 2-HR game is actually Bryant’s second of the season and he now joins Joe Carter as the only baseball players to do so. All of this from a 25 year old in his second season of professional baseball.