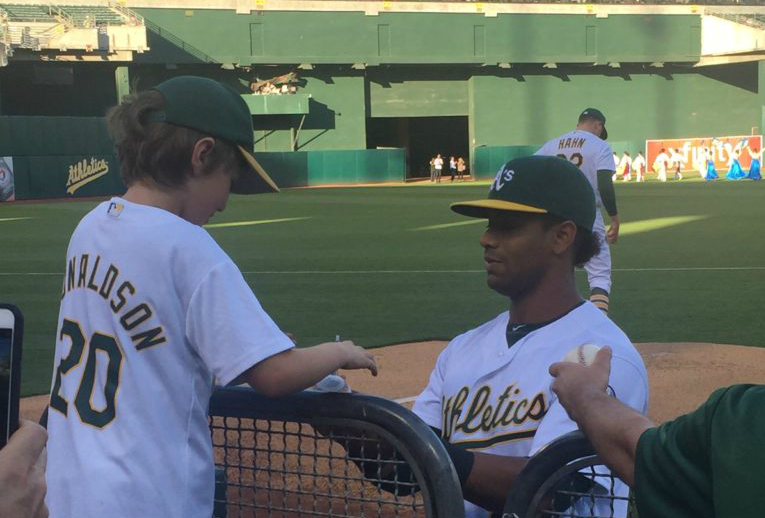 As spectators of the sport of baseball, there are good games, there are bad games, and then there are games that remind us exactly why baseball is the best damn sport there is. Sometimes it’s a tight game that your team holds onto for the win, sometimes it’s an absolute blowout in which you embarrass your rival. For me, those games are almost always walk-off wins. Those are special because, until that go-ahead run touches home plate, you can taste equal amounts of hope and doubt. A good combination of those emotions lead to the greatest ecstasy when your favorite team pulls off a walk-off win. A walk-off win is exactly what I got, along with the rest of my fellow Oakland Athletics’ fans, and one eager little boy, on the night of Tuesday, the 17th of May, when Khris Davis hit a grand slam into the left field bleachers. But there was more to Khris Davis’s night than a walk-off grand slam, even more than a three-homer night.

I made my way into the Oakland Coliseum with half an hour before first pitch. The first thing I noticed upon entry was just how empty it was, the lowest attendance before a game that I have personally witnessed. That’s bittersweet for me. I hate to see so few out to support the team, but I love the unique energy that a small crowd brings. Sometimes a sellout crowd doesn’t have the gusto of 12,000 in the seats. The crowd you get on a weeknight is usually the crowd who cares the most, people happy to leave their long days at work and head straight for the ballpark. Those are the crowds who make the most noise.

The second thing that I noticed in my section, just feet away from the bullpen mound, was a father sitting a few rows away from his son who stood quietly at the field gate at the end of the aisle, ball and pen in hand. He was prime baseball-loving age, maybe eight or nine years old. I watched as he stood there without trying to wave anyone over, not calling anyone’s names or numbers as Jesse Hahn prepared for his start with catcher Matt McBride, but I could see he was eager and maybe a little nervous.

As players took the field to perform their pregame workouts, he stayed exactly as he’d been: patient and hopeful. After a little while, a few other kids who had gathered behind him got the attention of bullpen coach Scott Emerson and they all got their signatures, including the patient young man. But an Emerson autograph wasn’t what he wanted most, he was waiting for a player, and he stayed in his spot at the gate after everyone else left.

I paid close attention to the players as they took the field, most were oblivious to the crowd past the dugout. But, as Oakland’s new outfielder Khris Davis came to left field, I saw him spot the young man with his ball in hand. He didn’t come over then, he joined his teammates and began to prepare for the game. He jogged and stretched, and as he did, I noticed him peek over several times at the boy. Not midway through his pregame warmup, on his way back from a sprint to centerfield, he looked around at the crowd and, seeing that there was no one gathered there for autographs or meet and greets, he put a finger to his lips in a gesture to keep the boy from bringing attention to him, then he began a slow jaunt toward the field gate where the boy stood. It was obvious that he had no intention of basking in his celebrity, he’d simply wanted to give this little boy what any baseball loving kid dreams about: a special moment meeting a big leaguer.

I took a moment to snap a picture of their exchange, Davis taking his time with the young man despite first pitch being not ten minutes away. He handed back the ball and pen to the young man and returned to his pregame workout, leaving behind more happy fans than just the young boy whose night he’d made. The few people in the seats nearby who witnessed the exchange smiled and cheered on the boy, happy that he got to meet a player after waiting for so long to no avail. It was the kind of genuine, sweet moment that would have made all of our nights, but Khris Davis wasn’t finished putting smiles on our faces.

The game itself was a good one, solid baseball until the ninth inning. Danny Valencia hit a homer in the second, keeping his hot streak very hot indeed, and Khris Davis, the man of the night, immediately followed up Valencia’s homer with one of his own. The Texas Rangers took a 3-2 lead in the fourth inning, but none other than Khris Davis tied it up with one swing of the bat in the sixth. The game seemed to be all sewed up, nicely and neatly, when the A’s went into the top of the ninth with a 4-3 lead over Texas.

Sean Doolittle had taken over for starting pitcher Jesse Hahn, going one inning and a third to bring it to sort-of closer, Ryan Madson who came in to get the final three outs. With Rougned Odor on base, and two out, Ian Desmond sent a crowd-quieting homer over the wall in left-center field. This is usually the point where people grab their things and flood out of the stadium, feeling angry and defeated as if the Oakland A’s gave up the lead to personally ruin the nights of their fans. That didn’t happen that night. Of all of the people around me, which ended up being a healthier crowd than I had expected from the pregame turnout, only two people left after the A’s lost the lead.

Stephen Vogt led off the bottom of the ninth for Oakland, singling on a ground ball. Coco Crisp kept the crowd on our feet with a double, landing Vogt at third. After an unproductive out by Billy Burns, Rangers’ pitcher Shawn Tolleson intentionally walked Josh Reddick, loading the bases. We, as a crowd, all stood anxiously as we watched Danny Valencia at bat. Though he had homered and then singled in a run after that earlier in the game, it was not Valencia’s night. He flied out, not deep enough to bring in the tying run. Still, the crowd stood, all united in our anxiety, desperation, disappointment at the blown game, and absolute hopefulness for a walk-off win, or at very least, extra baseball.

Khris Davis came to the plate. I had to look it up after the game to find out the count Khris Davis was faced with before he put a ball into play, it was two balls and two strikes. I couldn’t remember it. I could only remember the feeling I had standing there, in attendance by myself in the Oakland Coliseum, but not alone by a long-shot in a crowd full of passionate people. Before he put that ball into play, I thought about the little boy who had waited by the field gate before Khris Davis came over just for him, and how special that boy’s night would have been if that was all that Khris Davis had done, and at that point, Khris had already gone above and beyond with two home runs. But Khris Davis wasn’t finished. With two outs, two strikes, the bases loaded, and the A’s down by a run, Khris Davis hit a 95 MPH fastball out to left field. A walk-off grand slam.

The crowd was unified in that moment, a bouncing, shouting, high-fiving, laughing bunch of people from all walks of life. That’s what you get at the Coliseum, that’s what Oakland brings. An amalgamation of baseball fans, united by a love for the team, for the town, and for each other.
After taking my time to scream at the top of my lungs for a moment following the most spectacular homer in recent memory, I raced over to the section of seats behind the A’s dugout to watch the walk-off tradition unfold. A crew miked up Khris Davis for a TV interview and, not twenty seconds into it, Josh Reddick supplied his world-famous pies to the face of Davis, followed by a bath of Gatorade and then a shower of Double Bubble bubblegum. The players’ joy mirrored that of the crowd still there, watching the celebration.

As I left the ballpark, I thought of the other special games I’d been to, all at the Oakland Coliseum. I’ve seen a few exciting walk-offs, and those had been my favorites up until that point. This one was different, a little more special. The crowd was better, the game was more exciting, and the walk-off hit was more grand, no pun intended. This was a game to remember, and I’ll remember it well because I can imagine it through the eyes of the young man with the ball and the pen.
Whether or not there was a specific player that the little boy with the ball and the pen had been waiting for, I don’t know. Maybe he had a favorite player who he was dying to meet, maybe that was already Khris Davis. I doubt it mattered after that game.

That little boy will forever be able to tell the tale about the night he met the Tuesday night hero, Khris Davis.