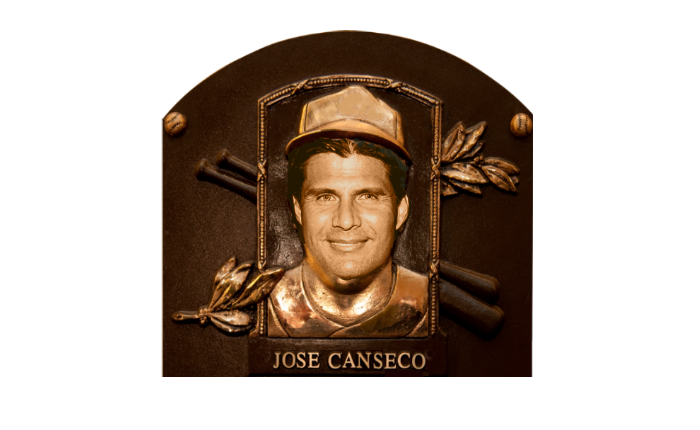 Jose Canseco took to Twitter on Monday night and demanded that baseball commissioner Rob Manfred make changes to the selection process for Hall of Fame inductees. His issue is a perception that some players who are known for using performance-enhancing drugs have been (or will be) inducted into the hall while other users are “banned” but his argument falls short in several ways.

First and foremost, his complaint to Rob Manfred is misguided as the commissioner of baseball has no governing power over the Baseball Hall of Fame and couldn’t impose or lift a ban of any player. Assuming that Canseco is aware of that fact and is simply addressing Manfred as a high profile figure in the sport, there are still several other issues with his argument.

The fact remains that any ban on inducting known PED users is unofficial and, in light of Bud Selig being inducted, has been reconsidered by several prominent Hall voters.

How dare MLB not let bonds ,mcguire, palmeiro,sosa,Juan Gonzalez and Roger clemens in the MLB hall of fame..

Of the names listed in this tweet, three are on this year’s ballot and eligible for induction if they meet the vote requirement. The rest of the players listed on the tweet have been on previous ballots and were all eligible for induction. A quick scan of Ryan Thibodaux’s BBHOF Tracker for 2014 shows Mark McGwire appearing on 11% of all ballots and Barry Bonds appearing on nearly 35%. It is not that these players are banned from the Hall, they simply don’t get the votes from a body that considers their numbers skewed by cheating or holds them in contempt for denying their PED use.

So taking away the moot argument to Manfred and the fact that there is no official ban, we are left with Canseco’s assertion that “ignorant uneducated people” are voting for the Hall. The fact of this matter is that many of the voting body has been covering baseball since deep into the PED era. These are not bloggers and armchair managers voting, they are reporters who spend countless hours in clubhouses and talking to players. There are few people in the game more qualified to judge the era than the majority of those on the voting committee.

The argument can be made, and was made in a series of tweets by Susan Slusser in December, that the induction of Bud Selig should cause voters to reconsider their stance. Slusser seemed to, reluctantly, come to the conclusion that players who never tested positive once PEDs were banned should be considered since the commissioner who turned a blind eye to the issue in favor of rebounding popularity and revenue for the sport is now in the Hall of Fame.

The same argument could have been made after the induction of Tony LaRussa and Joe Torre as managers. Both men managed successful teams at the peak of the PED era and had some of the sport’s biggest offenders on their roster. If McGwire can’t get into the hall, why should the manager who wrote his name alongside Canseco’s on his lineup card get in?

Selig, LaRussa, Torre, and a host of other powerful people in the sport reaped great rewards from ignoring the problem and the game of baseball, ultimately, enjoyed a rebirth because of the PED era. Maybe Canseco is correct in the broad strokes of his argument but the finer details are wrong in almost every way. The conversation on how to deal with this era in baseball’s history seems to get louder and more heated every year but the conclusive decisions have to come from the voting body and can’t come from the commissioner or from an ex-player on his annual quest to alienate himself from the game of baseball.

Rob Manfred fix the problem. Give me what I want and I will go away

Let us know if he returns your tweets, Jose.