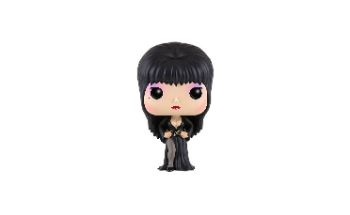 Elvira Mistress of the Dark Coming to Funko Pop

The wait for a Funko Pop depiction of Elvira Mistress of the Dark will finally end this December when the vinyl figure is released.

A staple of 1980s pop culture, Elvira was portrayed by Cassandra Peterson and influenced heavily by Vampira who is probably most famous for her work with Ed Wood. Peterson, as Elvira, added a punk rock edge to a classic 1950s campy style with a tight fit, low cut dress and a hairstyle that would be the envy of every member of Whitesnake.

Incredibly self-aware and wickedly sardonic, Peterson turned the format of horror movie host upside down and simultaneously lampooned and paid homage to the genre. Often speaking in doubled entendres and affecting a stereotypical southern California tone (see also Zappa’s Valley Girl), Elvira was a far cry from the “spooky” personalities that she was modeled after.

Initially, a local celebrity on Los Angeles television, Elvira became a home video star in the burgeoning VHS market and hosted several classic horror and suspense films, many of which would be suitable for Mystery Science Theater. This Funko figure, released as number 375 of the Television series, is a bit misleading because it is branded as Elvira Mistress of the Dark which was actually the name of her 1988 film.

Throughout the late 1980s and early 1990s, Elvira was one of the most merchandised pop culture icons of the time. Her likeness appeared on calendars, t-shirts, action figures, trading cards, video games, and pinball machines and she became the spokesperson for Mug Root Beer and Coors Light Beer in several television spots. She was a frequent guest on the Tonight Show with Johnny Carson, hosted Knotts Berry Farms’ Halloween events and was, herself, the subject of many retail Halloween costumes.

Her popularity has waned over the years but Elvira Mistress of the Dark is still a common merchandising figure with a large cult following. Along with Stan Lee, Peterson invested heavily in the Comikaze Fest which is one of the country’s largest pop culture conventions where she is a frequent guest of honor.

This release of Elvira Mistress of the Dark into the Funko Pop Television line will, most likely, be the sole vinyl figurine to bear her moniker considering her act was largely a one woman show but there is nobody between the ages of 35 and 60 who doesn’t know who Elvira is so it may be a popular nostalgia purchase for devoted children of the 80s.

As of right now, there is no word on whether Funko will release a Boobarella figure.