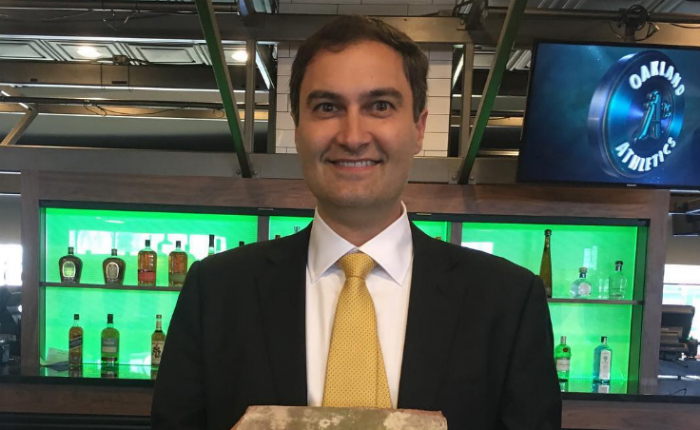 As the 2017 baseball season finally begins, a great energy is swirling around the Oakland Athletics and it is, in large part, thanks to the team’s new president, Dave Kaval. Since taking over the position held by Michael Crowley for over 15 years, Kaval has seemingly told fans exactly what they’ve wanted to hear for years and, at this point, whether he can live up to the expectation is secondary to the fact that he’s aware what the expectations are.

To the casual A’s fan, Crowley was a non-existent figurehead. To the die-hard, season-ticket holding, Stephen Vogt believing, A’s obsessed, super fan, Crowley was the guy who wrote a message in Athletics magazine. He was rarely seen at events, rarely spoke in public, rarely did interviews and, and rarely (if ever) uttered the word “Oakland”.

Dave Kaval, on the other hand, in just a few months has been seen at FanFest, he has given interviews, he has made himself available to fans, and he has become a public face for the front office the likes of which the A’s haven’t had since the Charlie Finley days.

Food trucks at the coliseum, a redesigned and themed West Side Club, FanFest at Jack London Square, Spirit Week, A’s murals, Oakland based advertising, aggressive social media marketing, Giants hat trade-ins, and a promise to stay in the East Bay have all been implemented in the first weeks of Kaval’s presidency. In nearly two decades, it is doubtful that any fan could list this many things that Crowley was responsible for.

Kaval seems excited about this job. He seems like the type of leader that can rally the troops and get things done. He seems like the public face that can boost civic pride and build excitement around a team that is, realistically, going to be lucky to hover around .500 this season. He seems like a man with a plan and whether or not he can hit all of his targets and fill enough seats is irrelevant because A’s fans just need to know that their beloved team is taken care of.

After years of hearing rumors of a move to Fremont, San Jose, or Portland, A’s fans needed to be assured their team wasn’t going anywhere and Kaval is delivering that message loud and clear. After years of an apparent disinterest in honoring the team’s storied history, Kaval has embraced the past as a critical touchstone for the future. After years of fans complaining that the team was being run like a business and not like a sports team, Kaval has given the fans a new voice and is actually listening to what they say.

It’s not that Kaval is a better president than his predecessor -having no knowledge of what his predecessor actually did makes that evaluation difficult to assess – but he is the president that A’s fans need right now. With the Warriors and the Raiders fleeing Oakland, A’s fans simply need good news and by all accounts thus far, Dave Kaval is the bringer of that news.

Tonight, as the 2017 season begins with a clean slate and immeasurable hope, the field will be dedicated to Rickey Henderson, Shibe Park Tavern will be serving cold beers and hot plates, and Championship Plaza will be bustling with massive tailgate energy. All of that is thanks to Dave Kaval and his team who hit the ground running and look to continue running for the foreseeable future. Also, Bill King is being honored for his induction into the Hall of Fame but we have Ken Korach to thank for that well deserved accolade.

Obviously, the hope is that Kaval can deliver on the hype but, on day one of the season, it’s nice to see so much excitement around the Athletics organization from the top down and to see them as a relevant force throughout the bay area. The future seems bright for the Oakland Athletics and, excepting the years with on-field success, it has been a long time since A’s fans could feel hopeful about the team’s leadership. Dave Kaval has a lot of work to do and it’s unclear how he can get it all done while still being president of a soccer team but he is truly the leader that A’s fans need at this point and his success could lead to the team’s greatest successes.