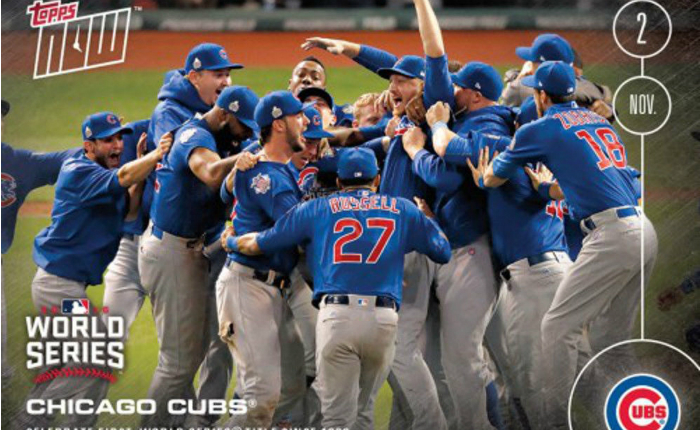 In case you missed, arguably, the best World Series game of the television era, the Chicago Cubs won. It only took 108 years but the last great curse of baseball is dead and Topps trading cards were quick to capitalize on what will surely be an active and aggressive collector market. We’re going to run down everything you need to know about Topps’ Chicago Cubs offerings in the aftermath of their historic victory over the Indians.

Throughout the World Series, Topps has issued daily cards featuring highlights from both the Chicago Cubs and the Cleveland Indians. A complete checklist of those cards (and all Topps Now cards) can be found under the tab at the top of this page. For game seven, every Topps Now card was a Chicago Cubs card and the checklist is as follows.

Topps also released autograph and relic cards for several of these cards, all of which are listed below and are limited in print runs. Most of these cards sold out within the first two hours of release and will appear on the secondary market at an increased price point.

Immediately following game seven, and continuing for a full week following, Topps is selling a team set of 15 Chicago Cubs cards. The checklist for that set is as follows and all cards are purchased in one package for $49.99.

This same set can be purchased for $149.99 and will include one on-card autograph with the following odds.

There will also be parallel autograph cards randomly distributed and, like other parallels in this set, numbered to 199, 99, 49, 25, 10, or 1 depending on the color.

As noted above, these are all specific to the game seven victory by the Chicago Cubs and do not include earlier World Series cards issued such as the Kris Bryant/Addison Russell dual autographed relic card, Aroldis Chapman autograph card, or any of the Cleveland Indians cards. For a full checklist, click the button at the top of this page.