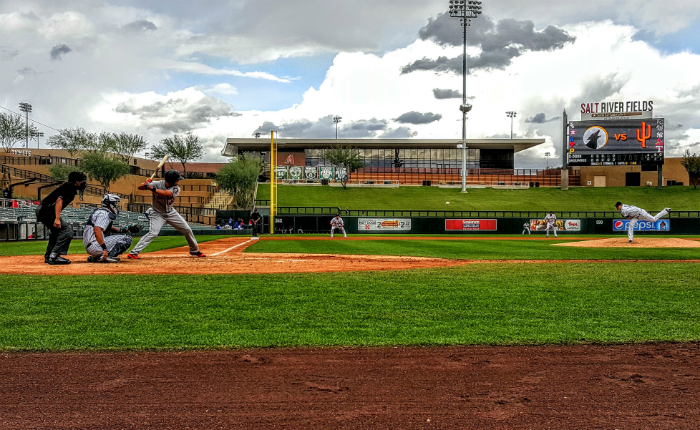 Chasing Millennials or How Baseball Ruins Everything

Rob Manfred is the commissioner of baseball and, if all of his dreams come true, he will be forever known for bringing millennials to the game of baseball.

There is a lot wrapped up in that opening sentence that will irritate a lot of baseball fans. As Jessica Kleinschmidt wrote earlier this week, it would appear that Manfred is ruining baseball despite his best intentions to save the game from itself but he’s merely keeping in line with a long tradition of being tone deaf to the fans. It is the commissioner’s belief that the pace of the game is what keeps the coveted millennials from investing their time and money into the sport and, in an attempt to remedy this perceived problem, he has attempted instituting rule changes that range from pretty stupid to a complete and utter joke.

The fallacy of Manfred’s entire campaign is the belief that the speed of the game actually has anything to do with anything at all and his changes are doing more to alienate the current fans than develop new fans. Take 2017’s intentional walk sign, for example. To speed up the game, Manfred has done away with the necessity of throwing four pitches outside of the zone to intentionally walk a batter. This shaves seconds off of every other game which is a negligible difference for anyone who is truly turned off by the pace of the game but a huge annoyance to fans who know what could possibly go wrong in that situation. Ultimately, this new “rule” is meaningless at best and, at worst, detrimental to the game.

Imagine if you had a 60 minute commute to work every day. Now imagine that your neighbor threw the best parties of your life once every couple of years. Now imagine that someone offered you a new house that would shave two minutes off of your commute for three days a week but moved you so far from the neighbor that you’d never be invited to their epic party again. That is the new intentional walk rule. But this article isn’t about that stupid rule, it’s about how baseball is actively turning millennials away from the game.

The Age of the Superstar

Tiger Woods, Michael Jordan, Michael Phelps, Serena Williams, Lance Armstrong are all household names and, with the exception of Jordan, they are household names for sports that most households don’t follow. Love him or hate him, Tiger Woods did more to popularize golf than any other athlete in generations and, as rising tides lift all ships, eventually elevated other golfers along the way. Michael Jordan was such an important player that an entire generation of basketball fans still adore him despite never having seen him play. Baseball needs a Michael Jordan.

Mike Trout and Clayton Kershaw are superstar athletes among baseball fans but a quick poll of uninterested mothers will probably suggest that they have no idea who either of those men are but they sure liked Lance Armstrong before the truth was revealed. Baseball needs some players who inspire kids to pick up bats and draws crowds to ballparks around the country. A fan used to know their favorite team sucked when they began advertising “come see Jordan play on Tuesday night” instead of promoting the home team. Baseball doesn’t have that.

So what can baseball do to elevate these guys? Marketing. It all comes down to marketing. Mike Trout is likely to reach a major milestone this week (if he hasn’t already) and the only place you’re likely to hear about it is on this website. It’s time that MLB actively attempts to get the best players, the most personable players, and the players with the best back stories in front of cameras on a national level. It is not enough to talk about them on the MLB Network, they need to be on Fallon and Ellen and 60 Minutes. They need to be in national ad campaigns and their achievements need to be recognized when they’re worthy.

Baseball needs a few super stars that the completely uninvested, uninterested, non-fan can get behind and root for. Instead, they have regional stars who are known among baseball fans and few others.

There once was an account on Twitter that posted gifs of great or funny baseball plays. Major League Baseball shut that down and that was stupid.

The argument that this practice constitutes distribution of a copyrighted telecast without the express written consent of Major League Baseball is a justified and legally sound one but baseball should really lighten up. The best thing that can happen to baseball, and can help a ton with the marketing mentioned above, is a few viral videos of amazing plays by the game’s best players. While a 20 second, low-quality, video of a single play from a single game may, legally, be copyright infringement, MLB should consider it fair use and begin encouraging this type of distribution. It will not hurt the bottom line of any team to have thousands or millions of people watch a gif on Twitter.

Further, what better way to attract millennials to the game than to have other millennials (and there are plenty of them) who are already fans curate an online library of the moments they are most impressed by? If baseball is really interested in this market, it is time to let the market do some of the heavy lifting.

Enough. Commissioner Manfred should never utter the words “pace of play” in a sentence for as long as he lives. Pace of play is not the reason millennials aren’t watching baseball games. The argument that a generation of people who will binge watch an entire season of The Walking Dead in a single day but can’t sit through a three hour sporting event is ridiculous. Especially when you consider that ten hours of Walking Dead is essentially eight hours of shaking off pitches, 45 minutes of mound visits, 16 pitcher changes, three intentional walks (with four pitches each), and a ninth inning walk off grand slam. Millennials are capable and accustomed to investing a little time into something they enjoy.

So why don’t they watch games? Because baseball has done everything in their power to hide them from a generation of viewers who are cutting their cable cords. In the bay area, the cheapest Comcast plan that includes A’s or Giants game will cost $60 per month and it will cost $70 to have MLB network. Averaging those out, MLB is expecting cord cutters to spend $780 per year to watch baseball games.

Of course, some of this falls on the individual teams and their negotiated broadcast contracts but MLB has to find a way for people to watch games on their devices without needing cable subscriptions or having their home teams blacked out. Ignoring the changing landscape of media viewership is not an effective means to maintaining or growing a fan base. Thursday Night Football will be on Amazon Prime, there’s no reason baseball can’t be as well. Is it an easy solution? No. Is it the best solution for the future? Yes.

All of this doesn’t even consider the strides that could be made by increasing minor league popularity (again, marketing) which helps spread the game to smaller communities, allows lower income families to take their kids to games, builds team and player loyalty, and increases revenue that can be passed on to paying the players a fair, living wage.

Ultimately, the office of the commissioner should be less focused on changing a near perfect game and more focused on marketing, community outreach, player safety, and keeping the players happy and on the field. Rule changes for the sake of a perceived complaint do nothing but hurt the brand. The audience baseball seeks is out there and they’re ready, willing, and able to drink the Kool-Aid but Manfred and company are going to have to meet them half way.