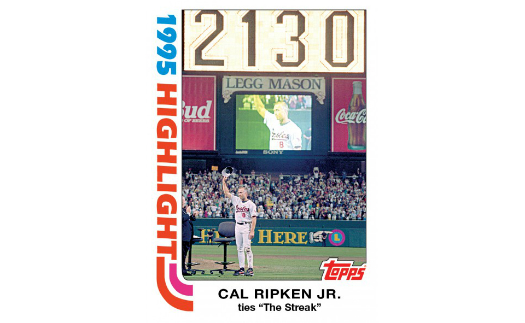 Throwback Thursday Sports Leave a comment
The Topps Throwback Thursday trading card series has been a popular online purchase for die hard collectors with new photos on classic designs. This week’s throwback is a career retrospective dedicated to Cal Ripken Jr. set on the card design of 1982 Topps Baseball, which featured his rookie card.

Specifically using the layout of the first six cards of the 1982 Topps Baseball set (Highlights), each card in the Cal Ripkin Jr. throwback series commemorates a milestone of his milestone rich career. The cards are numbered 72-78 in the larger throwback series.

At the age of 21, Cal Ripken Jr quickly established that his call was not a cup of coffee. With a batting line of .264/.317/.475, Ripken was awarded the Rookie of the Year award and finished 30th in MVP voting. He was the Player of the Week in June, ranked 7th in the American League for outs made, and 5th in range factor among shortstops. He posted a 1.4 dWAR, 4.1 oWAR, and a 47 RAR in 160 games.

His World Series numbers weren’t quite as impressive but it can be argued that the 1983 Major League Player of the Year, AL MVP, 1983 September Player of the Month, Silver Slugger did more than his fair share to help get Baltimore to the postseason. He ranked 1st in WAR (8.2), runs scored (121), hits (211), and extra base hits (76).

Cal Ripken Jr. appeared in the All-Star game in every season but his rookie year so by 1991, when he received the All-Star MVP award, he was on his ninth trip to the Midsummer Classic. He also managed to get a Gold Glove and a Silver Slugger award that same season and ranked first in WAR (11.5) oWar (9.2), dWAR (3.4), extra base hits (85), assists (495), putouts (267), and shortstop fielding percentage (.986). All of these stats would be reason enough to award him with MVP but he also ranked in the top 10 in virtually every other offensive and defensive metric in 1991.

Nobody who was a follower of baseball fan was unaware of the history Cal Ripken Jr. was destined to make in 1995 as he approached the longest streak of consecutive games in the history of baseball. On September 6, 1995, in front of a crowd that included the sitting president and vice president, Ripken broke the 56 year old record held by Lou Gehrig, appearing in 2,131 games. He received a 22-minute standing ovation that included both dugouts, all four umps, a sold-out stadium, and, probably, a fair share of people watching at home.

In 2007, with 98.5% of the vote, Cal Ripken Jr. was inducted into the Baseball Hall of Fame. Ripken was a 19 time All-Star, two time Player of the Year, two time AL MVP, two time AS MVP, and Roberto Clemente Award winner. He received eight Silver Slugger awards and two Gold Gloves all while playing with the Baltimore Orioles.

To say that he was a deserving player is an understatement of Ripken proportions. Beyond the field, Ripken has been a top-notch ambassador of the game and is probably one of the most beloved players of the modern era.

Topps Throwback Thursday cards commemorating this monumental career can be purchased online (HERE) but only until Thursday, September 15th.