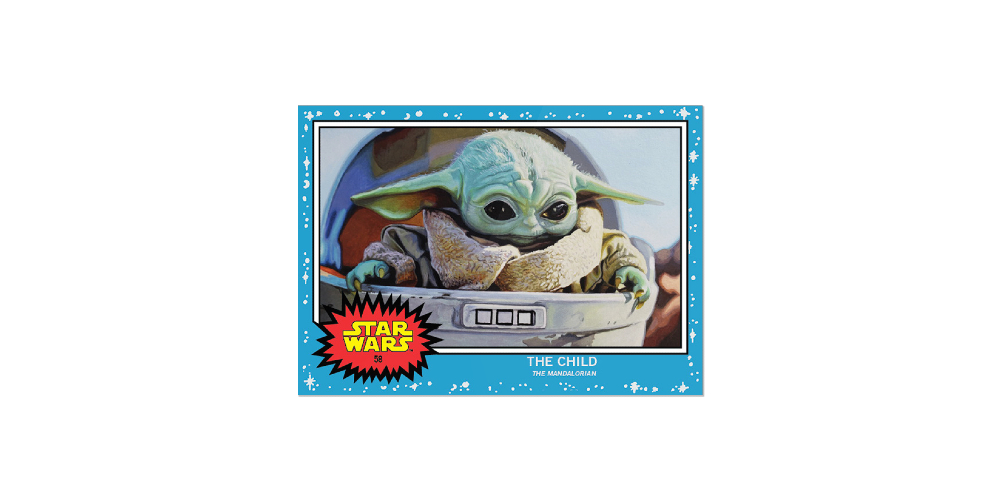 Baby Yoda has taken the Star Wars fan community by storm since his debut in November, 2019. Now, the adorable Jedi master is the subject of a Star Wars Living Set trading card.

The card is released on December 17, 2019 and available for only one week. This is the first card to be added from The Mandalorian television series from Disney+.

Topps Star Wars Living Set is an on-demand line of trading cards. Final print runs are determined solely on consumer demand. At the time of this card’s release, the top selling card was Darth Vader (#1) with 3,909 cards ordered. The lowest selling card belongs to Nute Gunray (#52) with 895 cards ordered. If Baby Yoda Mania holds for one more week, this card could easily over take Darth in the top spot.

Every Living Set card is a hand painted artist rendition and characters will not be repeated within the same franchise. That means, unless the character is used in films or shows beyond Mandalorian, this will be the only instance of “The Child” appearing in this expansive set.

The card, titled “The Child”, is #58 in this set and is released alongside a card for Dormé from Attack of the Clones.

The final print run for this card was 9,663 which made it the highest selling Star Wars Living Set card to date. It also made The Mandalorian the fourth best selling franchise despite having only one card release versus the top three’s eight cards each released.

Our checklist for the Star Wars Living Set includes all final print runs. To purchase your copy of this card, click the link below or visit eBay.