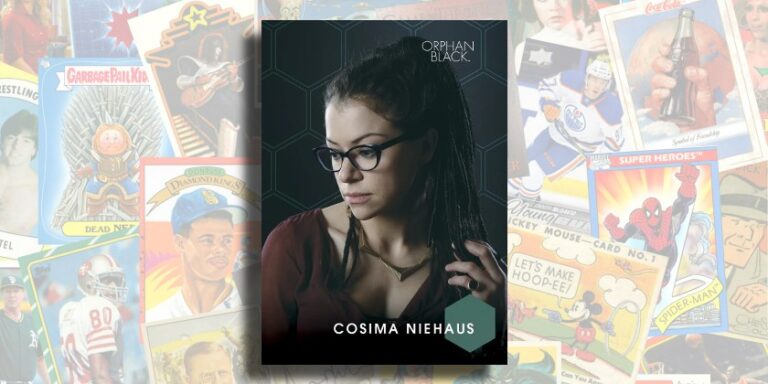 2016 Cryptozoic Orphan Black season one trading cards document moments from the debut season. The 72 card base set combines episodic images and quotes from the sci-fi television series. Every box promises one Autograph and one Wardrobe Relic.

Additionally, 2016 Cryptozoic Orphan Black Season One includes Character Bios, Felix’s Loft, IDW Comic Covers, and Quotes inserts to collect. There are also silver foil parallel cards for the base and each of the chase sets. Featured as several of her clone characters, Tatiana Maslany appears on many signed and wardrobe cards.

As with many Cryptozoic releases, there is a three-ring binder designed to compliment this set with an exclusive Dyad Institute swipe key replica card. Lastly, there are five promotional cards, not found in packs, that were given released during certain events including one at The National Sports Collectors Convention (#P1), and four during the 2016 Industry Summit (#P2-P5).

This checklist is organized by subset. Jump to a preferred subset by selecting it from the checklist key below. Clicking a link within the checklist will direct you to an affiliate retailer or to relevant eBay listings.