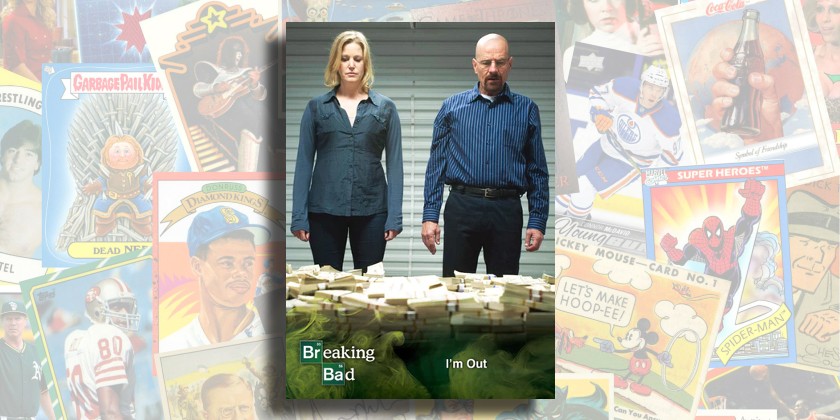 2014 Cryptozoic Breaking Bad trading cards cover the entire five season arc of the beloved television series. The base set hits all of the iconic moments from the show but the highlight of the set may be the Fan Art insert set which showcases beautiful artwork inspired by the series.

The autograph checklist is missing some of the main characters fans would hope for (Walter, Jesse, Saul, and Mike for example) but most of the ancillary cast is covered including Walter’s entire family. A series of redemption cards, measuring 4″ wide by 6″ tall, feature a piece of Jesse’s hoodie alongside a piece of the Valenzia’s pizza box used on the series.

As with most Cryptozoic products, a binder was also released for this set. A Walter White wardrobe card (#M22) was issued exclusively to fans who purchased the binder.

Due to the extra large checklist (by non-sports standards) it is impossible to compile an entire base set from one hobby box.

This checklist is organized by subset. You can scroll through the entire list or jump to a preferred subset by selecting it from the key below. Clicking a link within the checklist will direct you to an affiliate retailer or to relevant eBay listings.