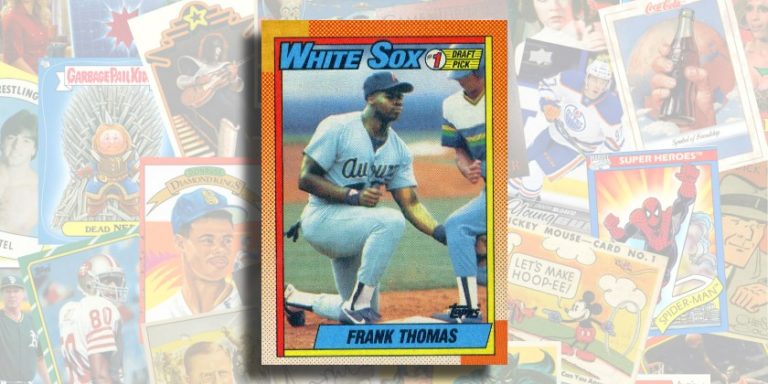 The 1990 Topps Baseball card checklist weighs in at 792 base cards and is a prime example of design and set size for the era.

Several Hall of Fame inductees appear in this set but the most notable name on the list may be that of Frank Thomas whose rookie card in included in this set. His card also has an error variant.

1990 was the second to last year that Topps included a Tiffany parallel set. Tiffany cards were only available in hobby shops and sold as factory sets. The main difference is a white cardstock, as opposed to the gray stock of the normal set, and a glossy finish.

One common card example from this series is a college baseball card of President George H.W. Bush. Although it is designed in the same way as this series, that card was a limited printing gift to the president himself. Cards given directly to the president have a glossy finish whereas non-glossy cards were also produced but not given to the Commander-in-Chief. To this day, it remains a mystery exactly how many cards were printed but it is believed that the president received 100 glossy cards for himself.

This checklist is organized by teams. Scroll through the entire list or jump to a preferred team by selecting them from the list below. Clicking a link within the checklist will direct you to an affiliate retailer or to relevant eBay listings.