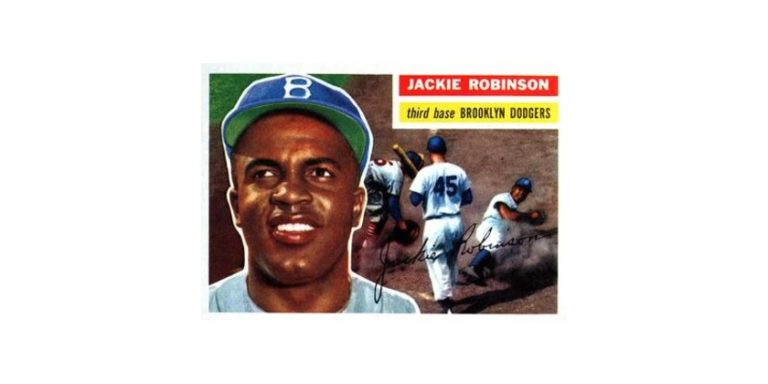 1956 Topps Baseball cards mark the end of an era in a way. This set is the last set of “oversized” trading cards produced by Topps. The following year they would adopt the now-standard 2-1/2 x 3-1/2 size and stick with it forever. This also marks the first season of the Topps monopoly on baseball gum cards.

The base checklist for this set includes 340 player cards and two checklists. It is also the first time that Topps would include team cards in a baseball set. The first two cards feature the American League and National League presidents respectively.

Two Hall of Fame inductees have their rookie cards in this set: Luis Aparicio and Walt Alston. Alston, as was the case with most of the cards released in early series’, has a color variant on the back of the card.

A series of 60 pins was also released by Topps that utilized the same portraits from this card series. It proved to be far less popular, though.

Our checklist includes all of the cards in this set. Scroll through each team or pick your team from the menu below and go directly to their cards. Clicking a link will direct you to an affiliate retailer or to relevant eBay listings.