Of the 20 artists participating in Topps Project 2020, Sophia Chang may be the one flying the lowest under the radar. Her designs are fun, colorful, and instantly identifiable — mixing real elements of the card with her signature visual accoutrements — but many of her print runs have been at or below average at their times of release.

Will the relative rarity of Chang’s early contributions create a secondary market buzz as collectors attempt to acquire the collection’s lower print runs? With print runs beginning to skyrocket in May, it is likely that her earlier cards will be among the most scarce of the entire series.

This guide will track all of the Sophia Chang releases as well as final print runs and sales ranks by artist and overall. Clicking a link will direct you to an affiliate retailer or to relevant eBay listings for that card.

Release ranks are simply where the card fell in order of print run at the time of the card’s release where final ranks are based on the completed set. Artist ranks are for the individual artists’ 20 cards. Chang’s first card, Mariano Rivera (#8) sold 1,617 copies. The average print run for the first 10 cards was 1,644 cards making her first showing on the checklist a strong one. Rivera was followed by Jackie Robinson (#31) which had a print run of 2,741 making it the fifth best selling card to that point in the series. 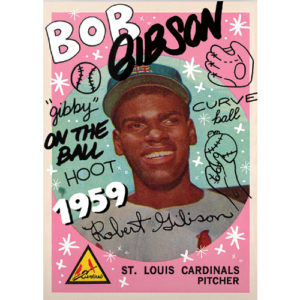 Her numbers would take a serious turn with the release of her Ichiro card (#62) which sold 6,207 copies. This card was only the sixth to break a 6,000 print run and sold more copies than her three previous cards combined. At this point in the Project 2020 timeline, sales are consistently higher and the 15 cards leading up to #80 all sold more than 5,000 copies. Because of this, Chang’s best selling card to date only ranked eighth overall. With her first cards selling a cumulative 11,833 copies, this single card nearly doubled her total print run. Sophia Chang’s next release was another personal best but in the 30 releases between her Clemente and Mays, the Project 2020 bubble had peaked and began to level out. This card was the 27th best seller to date despite a print run that exceeds her first four combined releases. Print runs for this point of the checklist vary greatly from card to card. Chang’s Henderson (#129) was only the second of her seven cards to not set a personal sales record breaking a three release streak. Despite a dip in sales, this Henderson was the third best selling of Rickey’s cards to date.