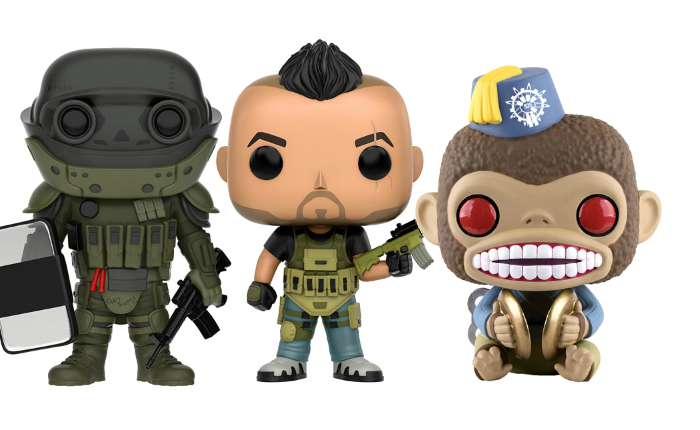 Six new Call of Duty vinyl figures are joining the Funko Pop! Games line in November, 2016 and will include two retail exclusives.

These are not the first Call of Duty vinyl figurines to appear in this series and will bring the total number to 14 with nine standard figures and five variants available. The latest addition includes the following characters:

Monkey Bomb (147) and Spaceland Monkey (148) are exclusively released to Gamestop and Target respectively and there are, thus far, no announced variants to hunt down.

Since its initial release in 2003, Call of Duty has become one of the gaming industries most popular and profitable franchises. With several sequels and spin off games released on a near annual schedule, more than a dozen titles carry the Call of Duty title and have been released on nearly every available platform.

Originally released as a World War 2 era first person shooter game, the Call of Duty franchise has evolved into a modern warfare game which has also spawned a card game, comic series, clothing, and several toys. Overall, nearly 200 million copies of the game have been sold and the franchise, owned by Activision, is worth over $10 billion.

While it is fairly common for Funko to include their licenses across several different lines of collectibles, Call of Duty vinyl figures have, so far, been exclusive to the Pop Games collection of their popular Pop figures. Other games that are included in this series include Five Nights At Freddy’s, Street Fighter, Gears of War, Mega Man, and Pac-Man.

For a full checklist, including variants and retail exclusives, click the tab at the top of this page.