This is the newest plush collection to come from Funko and features four characters from the film. The tiny plush toys are sold without blind packaging so collecting all four should be a breeze. 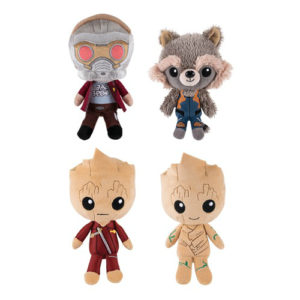 The Pint Size Heroes collection, which are sold in blind packages, feature 10 different characterizations from Guardians of the Galaxy Volume 2. 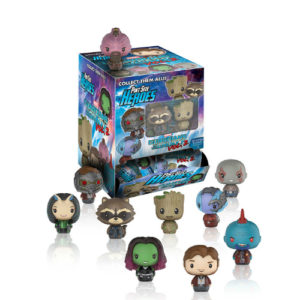 The popular Funko Pop figures take on a smaller role as keychains in this line with three characters receiving the old loop and chain treatment.

The Rock Candy line of figurines is devoted to the most iconic female characters in pop culture and feature a more life like, yet still Funko stylized, design. Two characters from Guardians of the Galaxy Volume 2 are joining the line in February.

The Funko Dorbz line of totes adorbz (get it) figurines continues to expand. Unlike the Funko Pop line which has several individual series with their own numberings, Dorbz are all filed under the same numbering system. Five new Dorbz are added with two retail exclusives thrown into the mix for hunters to track down.

Last but not least, the most popular and expansive collection released by Funko is the Funko Pop line of vinyl figures. Despite being branded as Guardians of the Galaxy Volume 2, the numbering sequence falls in line with the broader Marvel brand. There are 14 new figures set for initial release in February with some variants and retail exclusives.

These figures are included in our full checklists of Funko Dorbz and Funko Pop Marvel.